10 most compelling NFL comeback stories in 2019 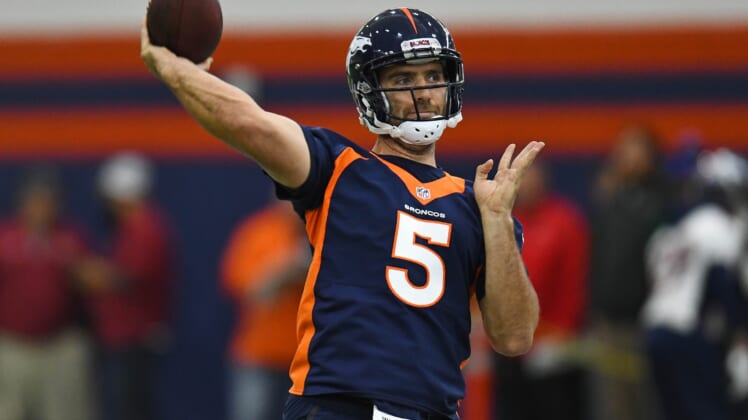 Looking ahead to the 2019 NFL season, among the many interesting storylines that have captivated us are the comeback opportunities for some of the league’s biggest stars — Jimmy Garoppolo, Earl Thomas and Jason Witten being key examples.

While many of the players we’re about to cover could win the NFL Comeback Player of the Year award, we’re more interested in the drama they can generate with successful campaigns. With that in mind, here are the 10 most compelling NFL comeback stories for the 2019 season.

The 49ers have thrown all their eggs into the Garoppolo/Kyle Shanahan basket. They spent big in free agency the past two offseasons and appear to have a roster capable of contending in the extremely difficult NFC West. It all boils down to whether Garoppolo lives up to the expectations this organization has for him. Before tearing his ACL early last season, he had given the 49ers hope while putting up impressive passing numbers. It’s playoffs or bust for this team, and Garoppolo is the linchpin.

Widely regarded as the best free safety in the NFL before breaking his leg last season, Thomas comes into the 2019 season as a heavy favorite to win Comeback Player of the Year. He signed a very lucrative deal with Baltimore and should immediately provide a boost as Eric Weddle’s replacement — if he can stay healthy. Because of the way things ended for Thomas in Seattle, he comes into this season with a humongous chip on his shoulder. We could be looking at an all-time great comeback season from this superstar.

Perhaps the most compelling comeback story of 2019, Witten’s return to Dallas after a season spent languishing in ESPN’s “Monday Night Football” booth will be closely followed by many — both on a local and national level. Just how much does Witten have left in the tank? He appeared to clearly be declining back in 2017 when his 8.9 yards-per-catch average marked a career low. However, perhaps his leadership will be just what the ‘Boys need to get over the hump.

Will Winston prove to be a bust? Or will the tutelage of noted quarterback whisperer Bruce Arians be the spark he needs to thrive? Winston’s 2018 season was a disaster. He lost his starting job to Ryan Fitzpatrick multiple times after opening the campaign on suspension, finishing with 19 touchdowns and 14 interceptions in just 11 games. Entering the final year of his rookie deal, it’s put-up or shut-up time for this former No. 1 overall pick.

The Rams have a plethora of talent on offense, so it wasn’t all that surprising that they made it all the way to Super Bowl 53 without Kupp. Yet it’s also impossible to ignore just how much better their offense was before the receiver’s ACL injury last season. Kupp is Jared Goff’s favorite target in clutch situations. He was on pace for 1,112 yards and 12 touchdowns before his season-ending injury. A healthy Kupp in 2019 could be just what the Rams need to take the next, most crucial step as they pursue the Lombardi Trophy.

Seattle deserves so much credit for the way it has handled a complicated salary-cap situation. One of the big moves the Seahawks made this offseason was trading Frank Clark to Kansas City, which backed up the Brinks truck afterward. A month later, Seattle quietly signed Ansah to a pennies-on-the-dollar deal. When healthy, Ansah has dominated. He put up 14.5 sacks in 2015 and 12 sacks in 2017 as a member of the Detroit Lions. If he can get back to that type of dominance, then Seattle will have made out like a bandit.

Given his comments regarding second-round quarterback Drew Lock, it’s clear the chip on Flacco’s shoulder is the size of Mt. Everest. He and the Broncos believe his best years are ahead of him, yet recent history in Baltimore suggests otherwise. Flacco hasn’t been “elite” since his legendary Super Bowl run following the 2012 season. John Elway has a lot riding on his decision to bring Flacco in as the undisputed starter. Already on thin ice due to poor quarterback decisions since Peyton Manning retired, Elway needs Flacco to play well and win games.

One of the best offensive linemen in the NFL, Frederick was diagnosed with Guillain–Barré syndrome and missed the entire 2018 season. It was a stunning turn of events for the four-time Pro Bowler, and his team. The good news is that he’s been working out with teammates and is making a strong push to play in 2019. Given that Guillain-Barré syndrome affects the peripheral nervous system and causes muscle weakness, it would really be something special if Frederick can make a successful return to the game.

The backdrop behind Bell and the Jets leading into the 2019 season sets up what could be quite a dramatic campaign. Head coach and interim general manager Adam Gase is reportedly not happy the team signed the All-Pro running back in free agency. That, by itself, lends itself to a ton of potentially budding tension within New York’s locker room. Then there’s the matter of Bell having sat out the entire 2018 season rather than sign the franchise tag in Pittsburgh. Whether it’s a spectacular dumpster fire or a success story, Bell’s addition to Gang Green is one of the most compelling comebacks of the coming season.

Coming off two surgeries in less than two years to repair damage to his throwing shoulder, Newton’s future is a bit murkier than he or the Panthers would like it to be. The good news is that Newton’s recovery appears to be on schedule, and on top of that the Panthers finally did some work during the offseason to shore up what’s been a terrible pass-protecting offensive line. When healthy, Newton is among the most dangerous quarterbacks in the NFL. He also has a talented supporting cast these days. If he can stay healthy throughout the season, Carolina is absolutely a legitimate contender in the NFC.