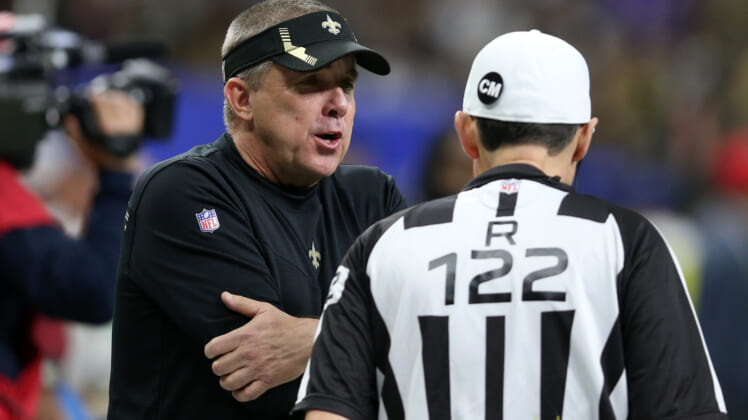 New Orleans Saints head coach Sean Payton was still livid after the loss to the Dallas Cowboys over the controversial blindside block during the Thursday Night Football game. After not receiving an explanation from the referees, the NFL is now admitting it blew the call.

In the third quarter of Week 13, quarterback Taysom Hill completed an 11-yard pass to wide receiver Deonte Harris for a first down to open the drive. But tight end Garrett Griffin was flagged for an illegal blindside block on Cowboys’ safety Jayron Kearse.

The 11-yard penalty put the Saints at their 10-yard line for a first-and-21 attempt. New Orleans couldn’t pick up the first down and punted it to Dallas. Four plays later, Cowboys’ running back Tony Pollard took off for a 58-yard touchdown run that proved to be the difference in a 27-17 win.

Following the loss, Payton told reporters he was given no explanation on the call from the referees and he didn’t understand why the block was illegal, as someone who was once on the competition committee.

“I’m not real familiar with that type of block on that situation. It’s unfamiliar.”

Two days later, the league admitted its officiating crew made the wrong call. According to NFL Network’s Tom Pelissero, the NFL privately acknowledged the call was incorrect.

“The NFL admitted to the Saints that officials should not have thrown a brutal blindside block penalty flag on Garrett Griffin on Thursday night. You see that call on interception returns, on special teams plays, not a tight end blocking a blitzing safety who is about to hit his quarterback.”

Of course, the Saints are no strangers to bad calls going against them in crucial moments. From the missed pass interference call in the 201 NFC Championship Game to blown calls this year, it seems this franchise often is on the wrong side of mistakes by referees.