NFC executive on Khalil Mack: Feeling is the Raiders are ‘open for business’ 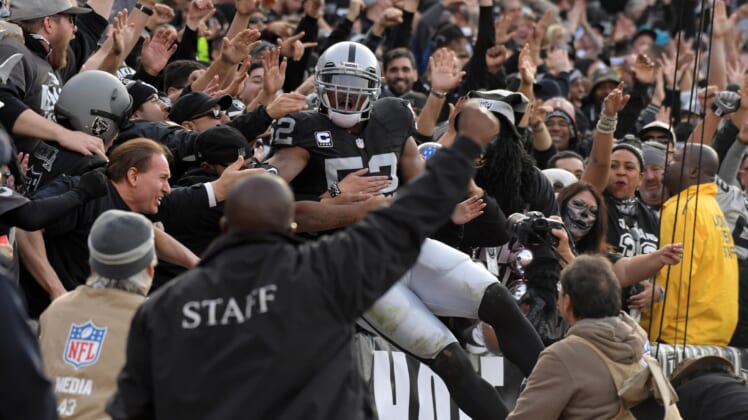 As the contract impasse between Khalil Mack and the Oakland Raiders continues to drag out into training camp, there’s a growing sense that the Raiders could look to trade their star defensive end.

On Tuesday, ESPN’s Paul Gutierrez noted that Mack’s holdout has been “mystifying” to the Raiders and pontificated that Oakland could look to trade him.

Then on Wednesday, Mike Freeman of Bleacher Report shared a quote from an NFC executive, who said, “There’s a feeling the Raiders are open for business when it comes to Mack.”

Now, it’s no secret that the relationship between Mack and the Raiders is not good right now — it’s recently been described as “tense.” Another report indicated that Oakland hasn’t even discussed a contract extension with Mack since February.

Set to play out the final year of his rookie contract without a new deal (if he shows up for work at all), Mack will make $13.8 million in 2018. He’s piled up 36.5 sacks the past three seasons, however, and would haul in significantly more guaranteed money on a long-term extension.

The Raiders haven’t given any indication so far that they are ready to pony up with the kind of cash Mack is seeking, so at this point a trade might just be the ticket.