Next round on the line when Sky visit Liberty 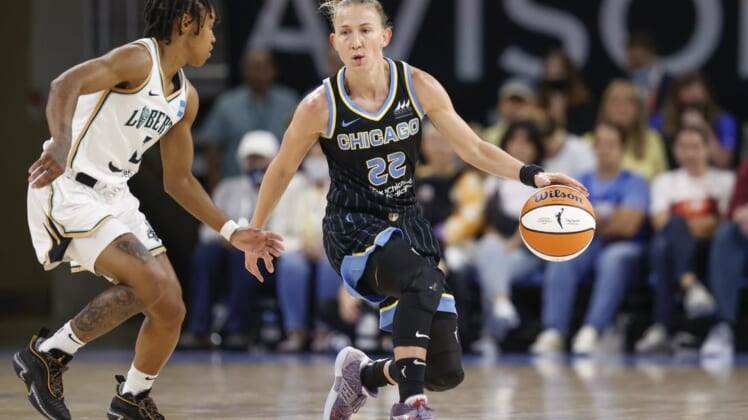 In scoring the final 13 points of Game 1 to take a 1-0 lead on the Chicago Sky in a best-of-three WNBA first-round series, the New York Liberty resembled a poised defending champion, instead of the opponent of one.

In establishing a 31-10 first quarter lead en route to a 100-62 rout in Game 2 on Saturday, it was Chicago that looked ready to make it back-to-back titles and New York that looked ill-prepared for prime time.

Which team will settle into what role for Tuesday night’s win-or-else Game 3 in Brooklyn? Will it be the second-seeded Sky or the seventh-seeded Liberty to earn ticket into the semifinals?

One thing’s for certain: New York coach Sandy Brondello wants her team to be on point from the opening tip.

“We just got to get back to what our identity is and doing the little things harder and better, and committing to that,” Brondello said. “We have to get off to a better start. We got to execute the scout.”

That means not falling behind by 21 points after 10 minutes, initiating instead of reacting, and stringing together stops on defense to get the home crowd engaged. It also means getting more than 23 points out of their starters.

By contrast, Chicago’s Kahleah Copper nearly outscored the Liberty starting five by herself in Game 2, pumping in a game-high 20 points to lead five players in double figures. The Sky were 51.3 percent from the field, dominated the boards 45-28 and bagged 14 steals with 19 turnovers.

The victory served to reinforce the Sky’s belief that they can repeat last fall’s unexpected championship.

“The motivation is a little different just because we do feel like we have another level,” Chicago point guard Courtney Vandersloot said. “We haven’t really put it all together yet. Our ceiling is so high.”

The winner of this series will meet either the Connecticut Sun or Dallas Wings in the next round. That series will be decided Wednesday night at Arlington, Texas.