Eager to do something kind for the single mother who raised him, new San Francisco 49ers wide receiver Eric Rogers bought his mom a new Nissan SUV.

Prior to signing on with the 49ers, Rogers received 13 offers following visits to 16 different NFL teams back in December and January.

Ultimately deciding that the 49ers and Chip Kelly’s system were the best fit for him, Rogers agreed to a two-year, $1.14 million contract.

It is pretty cool to see that one of the first orders of business he tended to was to get mom, Carrie Barron, a new ride.

“He always said, ‘Mom, I’m going to be an NFL player. I’m going to make it.’ I told him, ‘Baby, whatever your dream is, you can do it,” Barron said, via CSN Bay Area. “You have to stay on track and focus. The only person who can stop you is you.”

Rogers posted a picture of his mother and himself posing with her new car, captioning it: 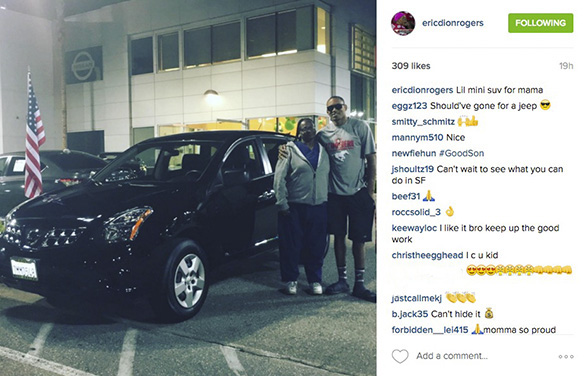 Rogers arrives in San Francisco fresh off tallying 87 receptions for 1,449 yards and 10 touchdowns for the CFL’s Calgary Stampeders last season.

After producing numbers like this, Rogers will attempt to make his impact known for a team that struggled a great deal on offense last season.