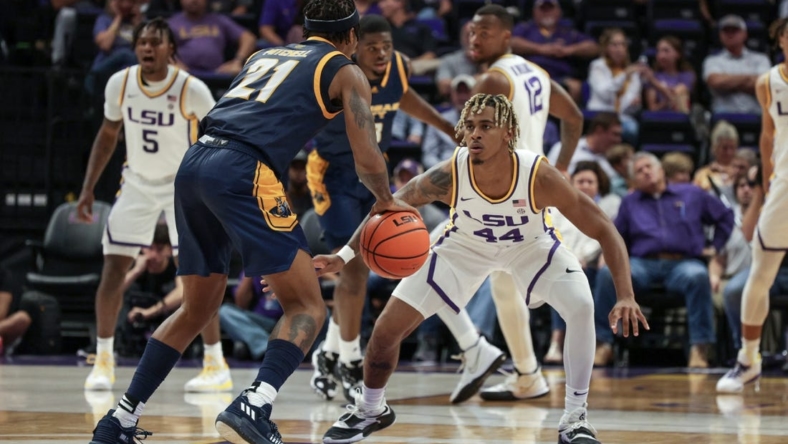 Miller and Williams were both making their Tigers debuts in Matt McMahon’s first game as head coach. Miller missed all of last season due to injury after transferring from Illinois. Williams, who finished with 13 points and 14 rebounds, is the reigning Ohio Valley Conference Player of the Year who followed McMahon from Murray State. Justice Hill added 13 points.

Miller started the second-half scoring with a jumper, and added a 3-pointer between two dunks by Johnson for a 50-38 Tigers lead.

The Roos made just two field goals during the first five minutes following the break, but crept within 63-54 on Allen’s 3-pointer midway through the half.

LSU’s Trae Hannibal scored the next three points, but a 7-0 run pulled Kansas City within 66-61.

Derek Fountain made two free throws to end the Tigers’ 4 1/2-minute scoring drought and he added a dunk for a 70-61 lead with less than five minutes remaining.

The Roos made just one field goal in the final 7 1/2 minutes.

Mwani Wilkinson, the most prominent hold-over from last year’s Tigers team, began the scoring by making a 3-pointer and added another for a 12-4 lead.

Allen David Mukeba Jr. made a 3-pointer to pull Kansas City within 15-12, but the Tigers rebuilt the lead to nine on a layup by Justice Williams.

Kansas City crept within 34-32 on a layup by Precious Idiaru, but Hill made two free throws and hit a 3-pointer down the stretch as the Tigers took a 41-34 halftime lead.