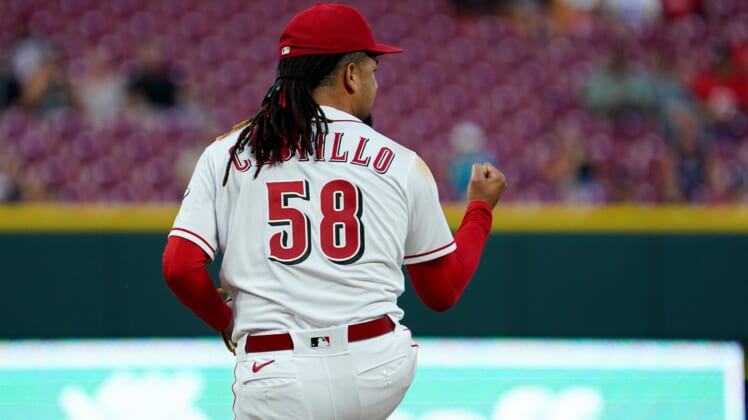 The New York Yankees on Wednesday evening acquired Kansas City Royals All-Star outfielder Andrew Benintendi. This blockbuster came with New York dealing away just two of its top-30 prospects, both of whom weren’t ranked terribly high in its farm system.

This has left the impression that front office head Brian Cashman is not done ahead of the Aug. 2 MLB trade deadline.

According to Andy Martino of SNY, the first-place Yankees are still in the market for a “high -end starting pitcher.”

According to the report, New York sent a scout to watch Cincinnati Reds ace Luis Castillo pitch on Wednesday. The team is also engaging in dialogue with the Oakland Athletics about Frankie Montas.

This shouldn’t be considered too much of a surprise. While the 66-33 Yankees have gotten great seasons from Gerrit Cole and Nestor Cortes, they’ll want to add another top-of-the-rotation arm for the playoffs. That’s especially true with Luis Severino once again sidelined to injury.

We mentioned Castillo and Montas above. Both would slot in behind Cole in the Yankees’ rotation. Each is under contract beyond the 2022 season.

In particular, New York has been linked to Castillo a whole lot in recent weeks. Things did seem to slow down when the Reds asked for one of the Yankees top-two prospects in that of shortstops Anthony Volpe and Oswald Peraza. Given the way Castillo has pitched recently, New York might have to bite the bullet and trade Peraza as the centerpiece for Cincinnati’s ace.

The New York Yankees are also said to be in the mix for Montas. He just recently returned from a minor injury and has pitched well as of late (2.25 ERA in past two starts).

These are the two headline starting pitchers on the MLB trade block ahead of the Aug. 2 deadline. As for a potential return, teams have shown increased interest in Triple-A pitcher and No. 5 Yankees prospect Ken Waldichuk. New York would likely have to include the pitcher in a trade for either Castillo or Montas.

There’s a number of other options that could be of interest to New York if the team is looking to avoid moving one of its top prospects.

Miami Marlins starter Pablo Lopez was just recently put on the block. With the San Francisco Giants in the midst of a seven-game losing streak, pending free agent Carlos Rodon could be on the market.

Meanwhile, two controllable pitchers in that of former Cy Young winner Shane Bieber of the Cleveland Guardians and Houston Astros starter Jose Urquidy have been talked about as being available. Though, it makes little sense for Houston to move Urquidy to a fellow American League contender.

What we do know is that these New York Yankees will make a move for a starting pitcher within the next few days. Castillo seems to be their top target with Montas coming in a close second.

Acquiring either one would make these Yanks the obvious odds-on favorites in the American League despite their continued struggles against Houston (2-5 record this season).

Stay tuned, there’s going to be a whole heck of a lot more coming from the Bronx over the next few days.