New York Yankees struggles: Roster parity has caught up to the team 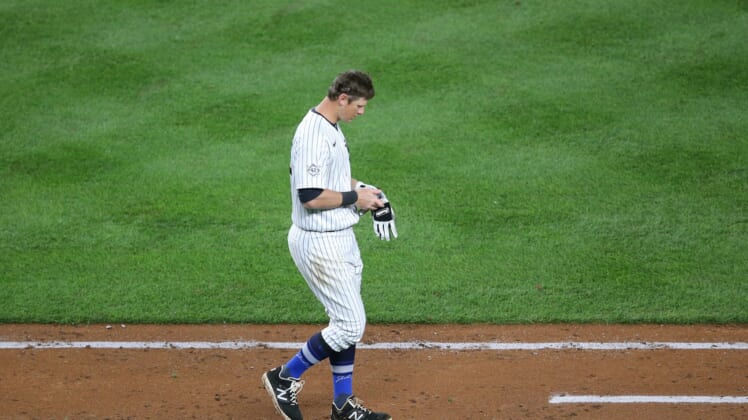 The New York Yankees are an American League-worst 5-10. To say their start to the 2021 MLB season has been rough would be an understatement. It has been outright disturbing.

They’ve lost four of their first five series, all of which have been against American League East opponents. Of course, the injuries to hard-hitting first baseman Luke Voit and cunning reliever Zack Britton are doing manager Aaron Boone no favors. At the same time, they shouldn’t be playing this poorly.

So, why are the New York Yankees off to such a bad start? Roster parity has caught up to them.

Their offense features a lot of the same type of hitters — home run hitters. Aaron Judge, Giancarlo Stanton, Gleyber Torres, Gary Sanchez, Aaron Hicks, Brett Gardner and Clint Frazier are all power hitters. More often than not, they’re threats to go yard, not smack a base hit the other way. That doesn’t mean they aren’t trying to spray balls across the field. Rather, their results at the plate tend to be boom-or-bust.

At times, this offense is a multifaceted hassle. Other times, they’re overmatched by premier strikeout pitchers. That’s why DJ LeMahieu, Gio Urshela and a healthy Voit are essential to their offense. They add offensive variety. LaMahieu is one of the best pure hitters in MLB, Urshela has a consistent, level swing and Voit draws a lot of walks. This gets runners on base to help take advantage of one of their sluggers taking the stitching off a baseball.

The New York Yankees’ offense has maintained the same identity for four years. Their core has been intact for the better part of that time and can be a bit predictable. Paint the outside corner and/or throw off-speed pitches with two strikes and there’s a reasonable chance they’ll wave at the offering. The Yankees’ offense entered Monday 26th in MLB in batting average (.210) and 30th in OPS (.642).

When someone comes up to the plate after another player strikes out, far too often they bring the same pluses and minuses to the table.

The Yankees essentially swapped Luis Severino’s health for Gerrit Cole last season, as the homegrown right-hander continues to rehab from an elbow injury. This past offseason, general manager Brian Cashman let rotation fixtures Masahiro Tanaka and James Paxton walk in free agency. They were replaced with Corey Kluber and Jameson Taillon, who each haven’t pitched a full season since 2018 due to injury.

Cole is arguably the best pitcher in the American League. Left-hander Jordan Montgomery logs strikeouts at a plausible rate and has a tall, deceiving delivery at 6-foot-6. All in all, this rotation is a guessing game, though. Domingo German was optioned to the team’s alternate site after two rough starts. Kluber is struggling to provide length. Taillon sports a 7.56 ERA across his first two starts.

This rotation has upside. But that was the case the three seasons prior, too. They need reclamation projects to prosper or veterans to stay healthy, much like the last two years with Tanaka and Paxton. In all likelihood, there will be buzz in the summer about the Yankees scouring the trade market for starting pitchers.

This is a middle-of-the-pack rotation that occasionally flashes brilliance outside of its ace.

Among the Yankees’ five series defeats include losing a combined four of six to the Toronto Blue Jays and five of six to the Tampa Bay Rays. Divisional games can make or break a team’s season no matter when they take place. While both of these teams have been hovering around .500 this season, them taking care of the Yankees was eye-opening from New York’s perspective.

Even with Blake Snell and Charlie Morton gone and their pitching staff destroyed by injuries, the Rays keep offenses in check with their array of versatile and effective pitchers. Around the diamond, they have a combination of fundamentally sound fielders with pop in their bats.

The Blue Jays have a deep-rooted offense of line-drive hitters who can only improve with reps. Their rotation is similar to the Yankees in having an ace and a lot of uncertainty in the form of young arms and needing veterans to get back on track. But again, the Blue Jays have won their first two series against the Yankees. Furthermore, they’ve done so without free agent signee George Springer.

Meanwhile, the Boston Red Sox are 11-6 with a loaded offense. They’re a team that can’t be overlooked in head-to-head play, either. The Yankees have their hands full in the AL East.

There’s time to right the ship, but the New York Yankees have hit an impasse

It’s far too early to even ponder pushing the panic button for the Yankees. That said, their alarming start is a glimpse of what the season could be without internal adjustments and/or growth.

Their offense is no different than the rest of the league. It has a lot of power. The rotation is unbalanced, whereas the bullpen has held its own to date. The Yankees sport one of the most-talented rosters in the sport and are an organization that has been in contention for the last four years for that reason.

The American League isn’t a sure thing, by any means. There are competitive but not overwhelming teams in the AL West, while the AL Central’s Minnesota Twins and Chicago White Sox are yet to win a playoff series with their respective cores. The Yankees have time to right the ship. It entails getting more runners on base and working the count more. They also need more length and reliability from starting pitchers not named Gerrit Cole.

The New York Yankees have hit an impasse. Now, it’s a matter of whether they can find a way around it.