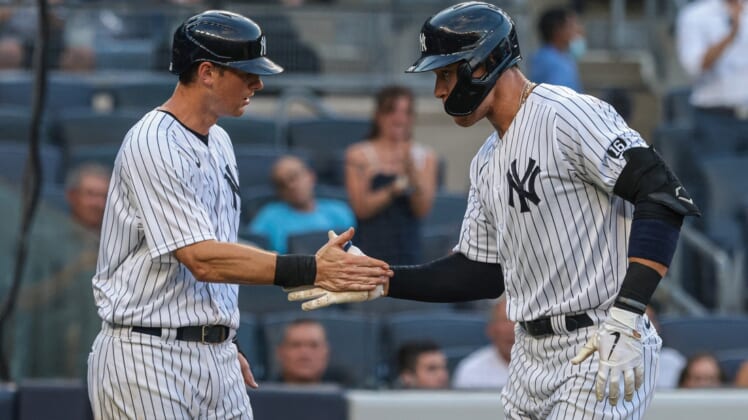 Gary Sanchez, Aaron Judge and Miguel Andujar homered as the New York Yankees enjoyed a rare productive showing at the plate and survived allowing two homers to Shohei Ohtani in an 11-5 victory over the Los Angeles Angels Tuesday night at Yankee Stadium.

The Yankees halted a four-game skid after GM Brian Cashman said they were “as bad as you can be” and that he was not blaming manager Aaron Boone.

After Cashman’s comments, New York set a season high for runs, marking the second time this season it scored at least 10 runs. The Yankees also hit at least three homers for the 13th time, finished with 11 hits and drew nine walks.

Sanchez reached the second deck in right field three batters in with his 14th homer and eighth in 18 games off Los Angeles left-hander Andrew Heaney (4-6). Judge hit a two-run homer onto the netting in Monument Park in center field in the second and Andujar began a five-run fourth with a homer to right.

Brett Gardner lifted a sacrifice fly and DJ LeMahieu added an RBI single before Judge capped a four-run second with his 18th homer.

Sanchez and Luke Voit followed Andujar’s sixth homer with RBI doubles and the slumping Gleyber Torres capped the fourth with a two-run single.

Miguel Andujar hit an RBI double in the sixth to make it 11-5.

Ohtani hit his 27th and 28th homers to take sole possession of the major league lead from Toronto Blue Jays slugger Vladimir Guerrero Jr. He also hit his 12th and 13th homer this month to move into a tie with Tim Salmon (1996) and Albert Pujols (2005) for the team record for homers in June.

Ohtani hit a solo homer in the third off Jameson Taillon (3-4) after the Yankees took a 5-2 lead and then connected again in the fifth after New York went ahead 10-3.

It was Ohtani’s fifth career multi-homer game and second this season for the two-way star, who is slated to pitch Wednesday.

Jose Iglesias also homered for the Angels, who lost for the sixth time in eight games.

Taillon allowed five runs on nine hits in 5 1/3 innings for his second straight win. He struck out four and walked one.

Heaney was lifted two batters into the fourth and was charged with a season high seven runs on five hits in three-plus innings for his third straight defeat.