The New York Yankees have been struggling for the better part of the last two months, and with their play reaching serious lows in August, popular ESPN analyst, and New York native, Stephen A. Smith took some major shots at his favorite team on Wednesday.

For much of the season, the Yankees were far and away the best team in baseball. Their pitchers were tossing up quality performances daily, Aaron Judge was on a path of destruction to the American League MVP award, and most of the team’s key players were staying healthy. And then July hit.

July was not a great month for the boys from the Bronx, however, August has made last month look like a solid showing. In 15 games this month, the team has won just four games. The most recent came on Thursday night when the team needed a tenth-inning grand slam from Josh Donaldson against the Tampa Bay Rays to pull victory from the familiar jaws of defeat.

With a 10-game lead in the division, there is no doubt the Yankees will win the AL East in 2022. Fortunately for them they are not the New York Mets and have a deep history of losing sizable first-place leads late in a season. Nevertheless, their play has been horrid over the last 17 days, and it’s drawn the ire of the very opinionated Stephen A. Smith.

On a Wednesday edition of the ESPN show “First Take,” Smith was asked about his favorite baseball team and he responded by comparing the Yankees’ recent place to the sewers of the borough he was born in. 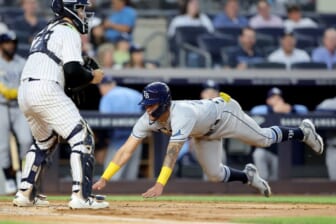 The Yankees will get a bit of a break in a four-game series versus a slumping Toronto Blue Jays team to finish the week, before welcoming cross-town rivals the New York Mets to the Bronx early next week.