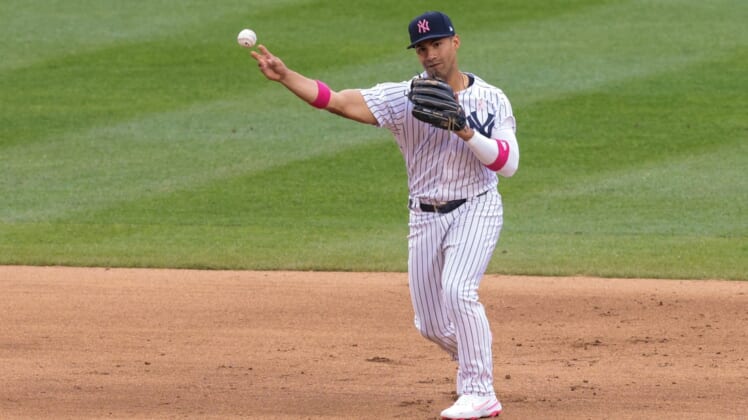 May 9, 2021; Bronx, New York, USA; New York Yankees shortstop Gleyber Torres (25) throws the ball to first base for an out during the seventh inning against the Washington Nationals at Yankee Stadium. Mandatory Credit: Vincent Carchietta-USA TODAY Sports

Yankees manager Aaron Boone told reporters that Torres, who previously had the COVID-19 virus in December and has since been vaccinated, was given the green light to return by the Major League Baseball/MLB Players Association joint committee.

Torres was in transit to meet the team in Arlington, Texas, where the Yankees are in the middle of a four-game series against the Texas Rangers.

Boone added that Torres may in the starting lineup as soon as Wednesday. Per league protocols, players who have been vaccinated and are asymptomatic are able to be cleared after undergoing two negative COVID-19 tests.

Torres, 24, was one of nine members of the Yankees organization who tested positive over the past week. The individuals who have been identified include Torres, pitching coach Matt Blake, third base coach Phil Nevin and first base coach Reggie Willits.