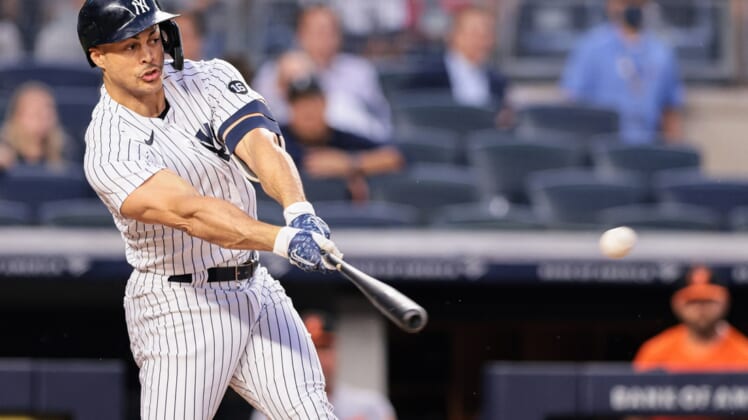 Luis Gil pitched six scoreless innings in his major league debut while Giancarlo Stanton homered and drove in four runs as the New York Yankees cruised to a 13-1 victory over the Baltimore Orioles Tuesday night at Yankee Stadium.

Stanton hit an RBI single in a five-run third and then hit a three-run homer in the fourth for a 9-0 lead that was plenty for Gil (1-0), who was summoned from Triple-A Scranton/Wilkes-Barre after Gerrit Cole tested positive for COVID-19.

Filling in for New York’s ace, Gil allowed four singles in an efficient 88-pitch outing. He struck out six and walked one and never encountered any trouble while continuing New York’s run of strong starting pitching.

The 23-year-old became the first Yankee to pitch at least six scoreless innings during a major league debut since Sam Militello on Aug. 9, 1992 against the Boston Red Sox.

Gleyber Torres hit an RBI double and also capped New York’s big inning with a sacrifice fly as the Yankees rebounded nicely from being held to three hits Monday.

DJ LeMahieu started the third-inning scoring with an RBI double and scored on center fielder Cedric Mullins’ throwing error on a base hit by Anthony Rizzo. After Stanton singled, Gary Sanchez lined a double to left for a 5-0 lead to knock out Baltimore starter Alexander Wells (1-2).

Aaron Judge hit a solo homer in a four-run eighth as the Yankees set a season high for runs.

The Yankees added three runs in the eighth on Tyler Wade’s two-run double and Rizzo’s groundout.

In his third career start, Wells was charged with six runs and allowed seven hits in 2 1/3 innings.

Gil was not the only Yankee pitcher to make his major league debut.

Stephen Ridings struck out three in the seventh and Brody Koerner pitched the final two innings.