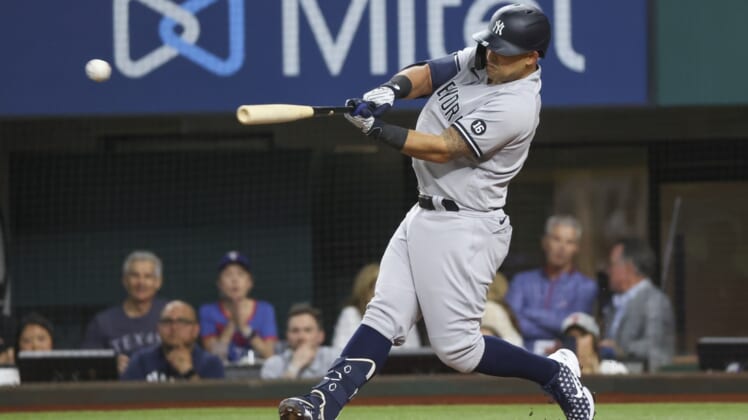 DJ LeMahieu hit a tiebreaking two-run double to cap a five-run fourth inning and the New York Yankees recorded a 7-4 victory over the host Texas Rangers on Tuesday night.

The Yankees rebounded nicely from opening the series with a 5-2 loss by producing a lengthy rally from a 3-0 deficit in the fourth off Mike Foltynewicz (1-4) to assure themselves of at least a .500 record on their 10-game road trip.

New York sent 10 men to the plate and produced four of its six hits with two outs.

Gio Urshela and Gary Sanchez started the rally with RBI doubles. Miguel Andujar followed with a game-tying RBI single that scored Sanchez, who left the game in the sixth due to left hamstring cramping.

Following a single by Mike Ford and a walk to Ryan LaMarre, LeMahieu lined a 1-2 fastball from Kolby Allard over first baseman Nate Lowe’s head and down the right field line.

LeMahieu drove in a third run with a sacrifice fly in the sixth after the Rangers got within 5-4 on Nick Solak’s homer in the fifth. New York added its seventh run when Brett Gardner scored on a soft grounder by Urshela in the ninth.

New York’s Jameson Taillon allowed four runs on six hits in 4 1/3 innings. He escaped the third by striking out David Dahl with runners at second and third.

Taillon breezed through the fourth and was lifted after Solak hit a fastball over the center field fence in the fifth.

Wandy Peralta (3-1) got the final two outs of the fifth and the first out of the sixth. Jonathan Loaisgia finished the sixth and tossed a perfect seventh.

Chad Green pitched a perfect eighth, Aroldis Chapman pitched a scoreless ninth for his 10th save and struck out pinch hitter Khris Davis on a 103 mph fastball to end it.