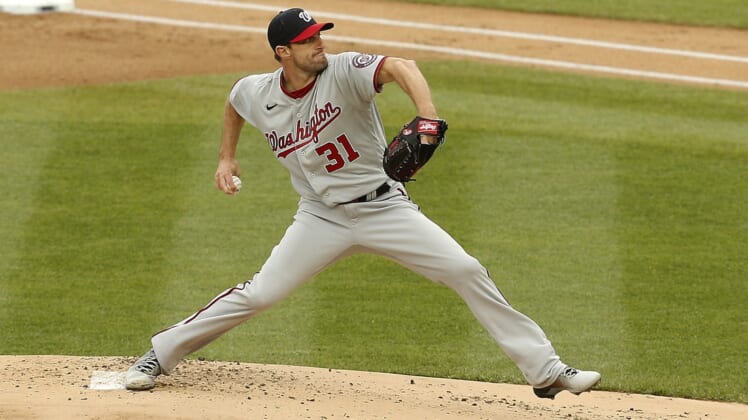 Gleyber Torres hit a bases-loaded infield single with no outs in the 11th inning, lifting the New York Yankees to a dramatic 4-3 victory over the Washington Nationals on Saturday.

The Yankees struck out 14 times against Nationals starter Max Scherzer before twice tying the game against Washington closer Brad Hand.

With DJ LeMahieu on second base to start the 11th inning, Aaron Judge and Giancarlo Stanton drew walks off Tanner Rainey (0-2) to load the bases. Torres gave New York its 12th win in 18 games when he hit a soft high chopper a little over halfway down the third base line.

Rainey moved in front of third baseman Starlin Castro to field the ball, but LeMahieu beat the off-balance throw home to cap the game that began after a two-hour, 25-minute rain delay.

Justin Wilson (1-0) pitched a hitless 11th after Yankees closer Aroldis Chapman allowed his first run of the season in the 10th.

The Nationals took a 3-2 lead in the 10th when Trea Turner lifted a sacrifice fly, but the Yankees tied the game on Mike Ford’s single off Hand.

Hand also gave up a game-tying hit to Torres in the ninth. He blew his first save in 25 regular-season chances since Aug. 23, 2019. Hand also squandered a save chance against the Yankees in Game 2 of the 2020 American League wild-card playoffs when he was pitching for the Cleveland Indians.

Before tying it, the Yankees were dominated by Scherzer, who was making his first start since becoming a father for the third time following his five-hit complete-game win over the Miami Marlins on May 2.

Scherzer allowed one run (a solo homer to Kyle Higashioka) on two hits and one walk in 7 1/3 innings.

The three-time Cy Young Award winner also moved past Mickey Lolich into 20th place on the all-time strikeout list at 2,845. Lolich had 2,832. He is 10 shy of matching Jim Bunning for 19th.

The Nationals scratched out runs in the third and the sixth off Corey Kluber, who allowed two runs on six hits in 5 2/3 innings.