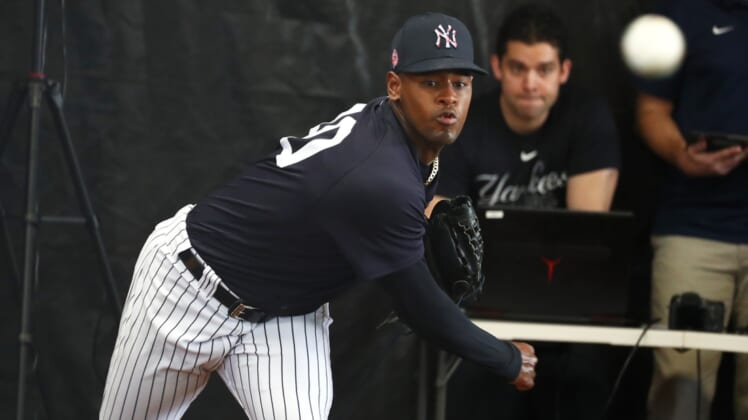 The wait for a healthy Luis Severino continues for the New York Yankees. And that wait will get even longer.

Already recovering from Tommy John surgery and seemingly close to a return to the mound for the first time since the 2019 season, the two-time All-Star right-hander’s comeback will be delayed at least another month because of a groin injury he suffered over the weekend.

Manager Aaron Boone told reporters Tuesday that Severino’s latest ailment, which he termed a low grade 2 groin strain, has quashed hopes for a return by the end of June. Instead, the earliest the 27-year-old will be back is late July.

“He’s in New York now. He’s already actually already up doing something as far as on the treadmill and things like that. Trying to keep him active,” Boone said. “He’ll probably try to keep his arm going even this week a little bit probably, start some light catch seated down and everything.”

Severino departed his Saturday rehab start for High-A Hudson Valley after 1 2/3 innings due to the injury. After throwing his 35th pitch in the outing, he was in visible pain and limped behind the mound as team trainers and others came out to assist.

He was helped off the field a short time later.

Severino has been working his way back from Tommy John surgery in February 2020. He also missed much of the 2019 regular season because of right shoulder rotator cuff inflammation and a grade 2 lat strain.

After back-to-back seasons with 30-plus starts in 2017 and 2018, Severino threw just 12 innings in three regular-season starts, plus 8 1/3 more in two starts in the playoffs.