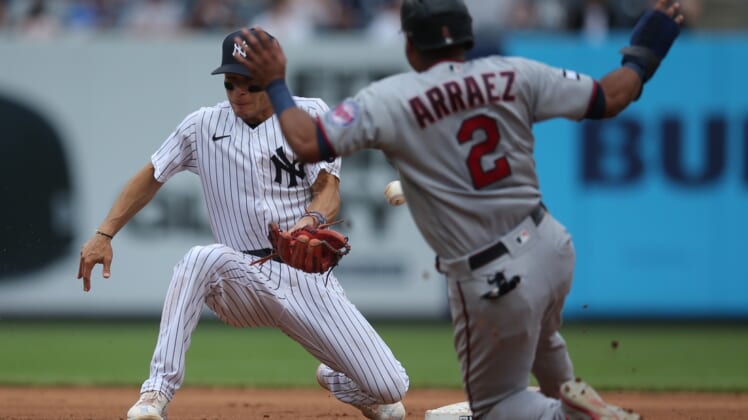 Gary Sanchez doubled with one out in the 10th inning after Aaron Judge hit a game-tying three-run homer with two outs in the eighth and the New York Yankees rallied from a five-run deficit for a 6-5 victory over the visiting Minnesota Twins on Monday afternoon in a makeup game.

New York (80-64) won for only the fourth time in 16 games following a 13-game winning streak from Aug. 14-27 that gave them a three-game lead in the American League wild-card race.

Sanchez won the game when he hit a 1-1 sinker off Ralph Garza Jr. (1-3) down the left-field line. Sanchez’s game-winning hit scored Gleyber Torres, who was moved from shortstop to second base and marked New York’s first comeback of more than three runs this season.

Judge forged a 5-5 tie when he hammered a 3-1 cutter to right-center field off Alex Colome, who had just entered for Tyler Duffey. Duffey opened the inning by walking pinch hitter Anthony Rizzo and exited after walking Brett Gardner on a close pitch, resulting in the ejection of Minnesota manager Rocco Baldelli.

Judge’s 33rd homer came a day after he exited Sunday’s emotional 7-6 loss to the New York Mets with dizziness in the third inning.

Jorge Polanco and Sano hit two-run homers in the first inning off Gil after the Twins (63-81) arrived in New York at about 1:30 a.m. ET due to plane trouble. Byron Buxton hit a solo homer in the third for a 5-0 lead.

Minnesota used six relievers after starter John Gant lasted 12 pitches. He exited due to a lower abdominal strain three batters in and was lifted after walking Judge on four pitches.

Minnesota took a 2-0 lead when Polanco blasted an 0-2 changeup into the right-field seats. Sano followed three batters later when he lifted a first-pitch fastball just over the left field fence. The Twins went up 5-0 when Buxton homered on the first pitch, driving a fastball over the left-center field fence.

New York scored its first run when Max Kepler made a leaping catch after a hard collision with the right field fence in the sixth and Gallo’s homer to right-center in the seventh made it 5-2.