There is no way around it. The Yankees have been a subpar team for the last two months of the season. After a five-game win streak that saw the boys from the Bronx sweep their two-game series against crosstown rivals the New York Mets, the team has slipped right back into the losing ways they have become accustomed to in July and especially August.

The Yankees have now lost five of their last six, which includes losing a pair of series’ to American League West bottom feeders the Oakland Athletics and Los Angeles Angels. However, last night’s drubbing to division rivals the Tampa Bay Rays is far worse. After dominating the division, and honestly all of baseball, for the first few months of the season the Yankees are in close range of an epic collapse.

What was once a double-digit lead in the AL East has now dwindled down to just five games following their 9-0 loss on Friday. The stress of the team’s play has been getting to manager Aaron Boone for weeks, and he revealed yesterday that he hopes his team has finally gotten its “rock bottom” wakeup call.

New York Yankees Aaron Boone: ‘It’s just embarrassing when you get beat like that’

For Boone, he knows the immense talent on the team’s roster and is aware they are far better than they’ve shown over the last eight weeks. He understands his group of players is putting in the work to get out of their slump, and he seems to hope the embarrassment of being slapped around by a team seriously threatening their spot in the 2022 MLB playoffs will galvanize his team to return to the standard they set for most of the season. 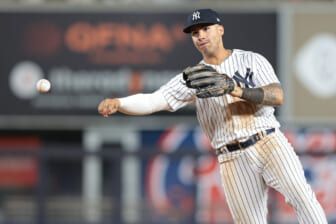 Also Read:
It’s time for the New York Yankees to move on from Gleyber Torres

The second game in the Yankees and Rays series begins at 6:10 PM ET on Saturday with a matchup between starters Corey Kluber and Clarke Schmidt.