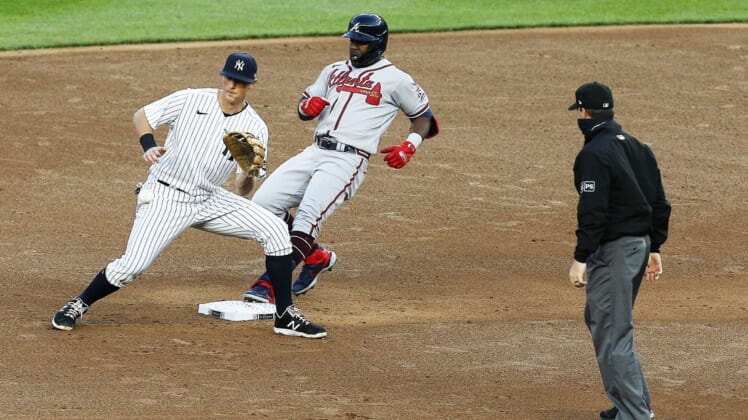 Pinch hitter Aaron Hicks scored the tiebreaking run on a wild pitch with nobody out in the eighth inning and the New York Yankees halted a five-game losing streak with a 3-1 victory over the visiting Atlanta Braves at Yankee Stadium on Tuesday night.

The Yankees loaded the bases with nobody out in the eighth off left-hander Tyler Matzek (0-2) on a walk to Hicks ahead of singles to DJ LeMahieu and Aaron Judge.

New York sent up Clint Frazier to bat for Brett Gardner against right-hander Nate Jones and the Yankees went ahead when Hicks scored standing up on a wild pitch that went all the way to the backstop.

After Gleyber Torres flew out to center with the bases loaded, Mike Ford — who was called up from the Yankees’ alternate site — made it 3-1 by drawing a walk.

Hicks scored the tiebreaking run two days after making two defensive miscues that led to runs in Sunday’s 4-2 loss to the Tampa Bay Rays. He wasn’t in the starting lineup Tuesday but batted for Mike Tauchman and started New York’s rally by looking at four straight pitches out of the strike zone.

After Justin Wilson retired Freddie Freeman with the bases loaded to end the seventh, Jonathan Loaisiga (2-0) hit Marcell Ozuna on his first pitch of the eighth but got a double play on Travis d’Arnaud and fanned Ozzie Albies.

Aroldis Chapman fanned two in the ninth for his second save.

The rally helped the Yankees avoid their worst 16-game start since opening 1966 with 12 losses in their first 16 games en route to a 70-89 finish.

The Yankees mustered little off Charlie Morton, with Gio Urshela’s home run tying the game at 1-1 in the fifth.

Facing the Yankees for the first time since Game 3 of the American League Division Series, Morton allowed one run on three hits in six innings.

Ehire Adrianza hit a double to give Atlanta a 1-0 lead in the third, a lead that lead lasted until Urshela hit Morton’s first-pitch fastball onto the netting above Monument Park in center field.

The Braves were without star outfielder Ronald Acuna Jr., who sat out with a right abdominal injury he sustained in Sunday’s game against the host Chicago Cubs. Acuna missed a game for the first time this season and is day-to-day.