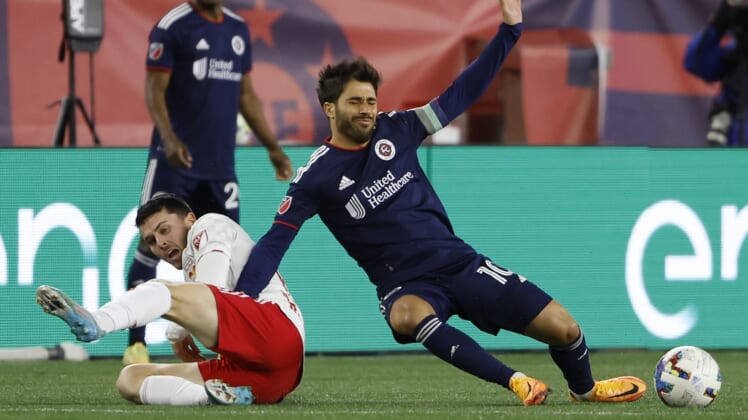 A fortunate bounce in the 90th minute lifted the visiting New York Red Bulls to a 1-0 win against the New England Revolution on Saturday.

Ashley Fletcher’s cross attempt from the right side hit New England midfielder Matt Polster’s foot at the top of the area and bounced into the net.

The Red Bulls had the early jump. In the ninth minute, New York’s Dru Yearwood took a pass from defender John Tolkin and tried to cut through the Revolution defense, but goalkeeper Brad Knighton came up with the save and three minutes later Knighton stopped Patryk Klimala on a counterattack.

The Revolution started to find their legs around the 15-minute mark and had an opportunity in the box but couldn’t get a shot off. A minute later, Brandon Bye set up Sebastian Lletget for a chance and in the 19th minute Carles Gil had his chance in the box blocked by New York defender Aaron Long.

Frankie Amaya’s shot through traffic from the top of the box in the 29th minute was denied by Knighton, who dived to get his hands on the ball.

Knighton’s strong outing continued in the second half. In the 56th minute, he got his hand on an attempt from Cristian Casseres Jr. from the box, deflecting it away.

The home side continued to press as the half progressed. In the 63rd minute, Emmanuel Boateng drove down the left side and sent a cross to Lletget in the area, but Lletget’s shot missed the net.

New York was forced down a man in the 73rd minute when Amaya was shown his second yellow card of the match. The midfielder tried pleading his case, to no avail.

In the 81st minute, Lletget was denied by the quick hand of goalkeeper Carlos Coronel, who got a tip of the ball on Lletget’s attempt from the area.