In a surprise to no one, New York Mets billionaire owner Stephen Cohen would be open to exceeding the new tax threshold that has been unofficially named after him.

In his second full season as the man calling the shots in Queens, Cohen has already taken his club above the first barrier of the payroll tax penalty zone at $230 million. He happily did so in December when he opened the cophers wide and gave out a three-year, $130 million contract to six-time Cy Young award winner and 37-year-old pitching ace Max Scherzer.

Fully aware that the Mets owner might be unafraid to test the very limits of taxability once the MLB lockout came to a close, an all-new addition to the 2022 collective bargaining agreement included a fourth tax bracket that has been dubbed the “Steve Cohen Threshold.” This fourth level of penalties kicks in once a team’s payroll reach over $290 million.

In a Saturday report from SNY Baseball Insider Andy Martino, it seems the team and its wealthy owner would be perfectly fine going all the way up to this newly introduced threshold if the opportunity was truly worth it.

“The Mets would likely exceed the new Steve Cohen Threshold of $290 million if the right opportunity came along,” Martino wrote on Twitter.

The idea seems obscene at first. However, The Athletic’s MLB writer Ken Rosenthal recently reported that the new “Cohen Threshold” isn’t really the poison pill one might assume. He estimates “it might only be an additional $1-$2 million in penalties” that Cohen would have to pay. 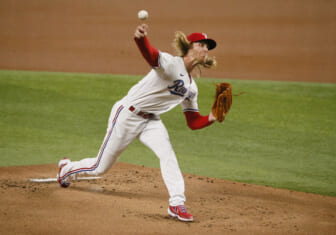 If Cohen reaches up to $290 million and past the three previous tax brackets for the Mets’ 2022 payroll, what is a couple million more in penalties to attempt to bring a championship to Flushing for the first time in since 1986?

Homegrown talent Michael Conforto is currently a free agent and could cost the team a pretty penny if they decide to bring him back this season. The Mets were also reportedly interested in starting pitcher Yusei Kikuchi before he signed a multi-year deal with the Blue Jays on Saturday.