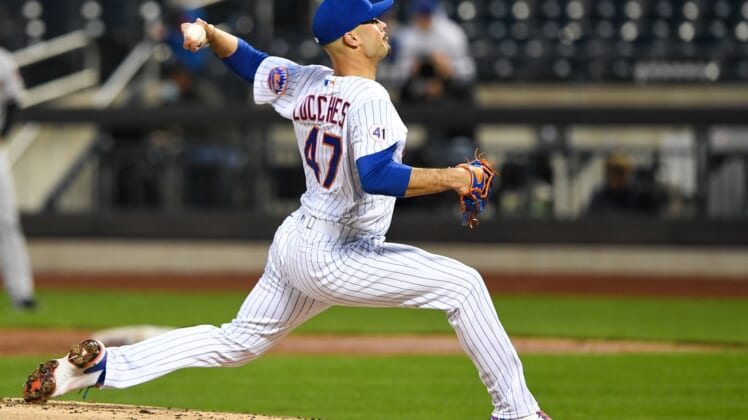 Jeff McNeil hit a two-run homer and Francisco Lindor scored once and drove in another to lead the New York Mets to a 4-2 victory over the visiting Arizona Diamondbacks on Saturday night.

Lindor reached base three times on two hits and a walk and stole his 100th career base one night after he and McNeil reportedly were involved in a dugout tunnel incident. The duo combined for three of New York’s four hits.

Right-hander Trevor May allowed only a single while working the ninth for his first save of the season as the Mets won their fourth straight game.

Carson Kelly and Josh Rojas each had two hits for Arizona, which has lost five consecutive contests.

Left-hander Joey Lucchesi (1-2), the second of five New York pitchers, was credited with the win. He allowed one unearned run, two hits and one walk and struck out three in 3 1/3 innings.

The Mets scored three runs in the bottom of the third inning and Lucchesi got it started by drawing a leadoff walk. McNeil followed with a 390-foot blast over the wall in right center. It was his third home run of the season.

Lindor followed with a walk before the next two batters were retired. He then stole second and Carson Kelly’s wide throw deflected off the Diamondbacks’ Nick Ahmed and rolled into shallow left-center field. Lindor got up and circled the bases to make it 3-0.

Rojas led off the sixth inning with a single to center, Arizona’s first hit of the game. There were runners at the corners later in the inning when Rojas scored on David Peralta’s infield out.

The Diamondbacks loaded the bases with two outs in the seventh off right-hander Jeurys Familia, who fell behind 3-0 on Christian Walker before inducing a full-count grounder to shortstop.

The Mets tacked on a run in the bottom of the frame on Lindor’s run-scoring single to center off right-hander Chris Devenski.

Arizona put two runners on in the eighth against left-hander Aaron Loup before pinch-hitter Stephen Vogt lined an RBI single to right center to bring the Diamondbacks within 4-2.