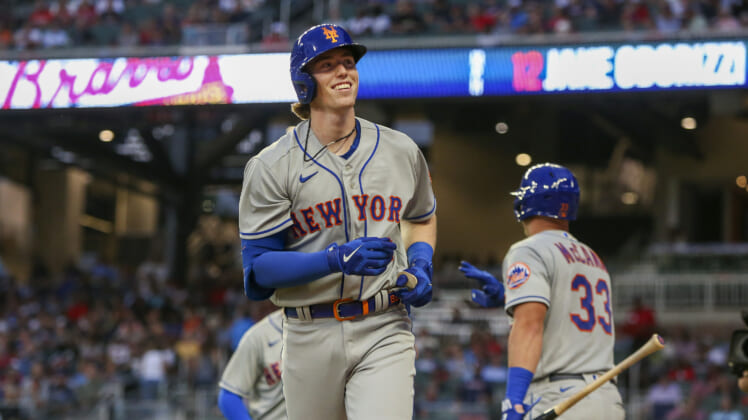 On Wednesday night, New York Mets prospect Brett Baty thrilled fans with a showcase of his potential and gave them hope the organization could have another homegrown star on its hands. The question now is, will Baty be the last top prospect to give the Mets a boost for the final months of the season and beyond in 2022?

Baty, the second-ranked player in the Mets farm system and 19th overall on MLB.com, had a strong showing in his debut start as a major league player. In front of friends and family who attended the game in Atlanta, the 22-year-old hit a two-run home run on the first pitch he saw as a member of the big league roster. While that was his only hit on the night, it will be a moment he will never forget.

Baty is sure to get a boatload of opportunities over the next month with both members of the New York third base platoon, Luis Guillorme and Eduardo Escobar, on the injured list. Despite the organization’s decision-makers taking a stance recently that they were unlikely to bring up a top prospect in 2022, Baty’s promotion shows their position is pretty flexible based on need.

Many of the organization’s top 20 prospects are playing in Single-A or Rookie league, meaning they are not at all an option this season or even next year. However, Triple-A stars Francisco Alvarez, Mark Vientos, and Jose Butto are all on the cusp of being called up. Let’s take a look at the odds of either of these players being promoted this year.

Alvarez is the player that most Mets fans are hoping to see this season. He is not only currently ranked as the top player in the team’s system but is viewed as the top prospect in all of baseball. In 2022, the catcher has split time between Double and Triple-A and has been equally outstanding at both levels. the 20-year-old has an absurd slash line of .356/.500/.856 in 2022 and has smoked 23 home runs and drove in 65 runs-batted-in. 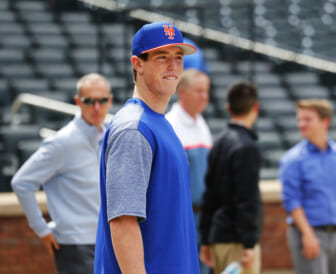 The Mets could use an upgrade at catcher and were linked to trades for Chicago Cubs star Willson Contreras at the trade deadline. In most situations, promoting Alvarez would be likely but catcher is one of the most important positions in the sport, and bringing in a 20-year-old to manage a veteran pitching staff with serious hopes of a World Series run is not advisable. It’s just too risky since the team has massive hopes for Alvarez beyond this season.

Chance of being called up: Unlikely

It was recently reported that if New York did not land a big name at the deadline — they didn’t — that Vientos would likely get called up to Queens in August. However, it was Baty, a player that was recently in Double-A, that got the call instead.

The first and third-base talent has been in Triple-A all season and has put up some strong numbers. He has a slash line of .275/.355/.521 with 20 HR and 63 RBIs. Baty may block Vientos at third, however, if recent acquisition Darin Ruf were to underperform as the righty in the designated hitter platoon, it could open the door to Vientos getting the call in September.

Chance of being called up: Possible

Butto is the Mets’ highest-ranked pitcher in Triple-A. The 24-year-old is the 15th-ranked player in the farm system and was promoted from Double-A to Triple-A recently. Yet, despite the promotion his stats in Double-A this season were not as strong as 2021.

Butto’s ERA increased from 3.83 to 4.07 and batters are hitting almost .020 better against him this season. In his Triple-A debut on Aug. 12, he gave up five hits and three runs over five innings and struck out just two batters. Not the sort of performance to push him ahead of schedule and on to the big leagues in high-pressure situations. 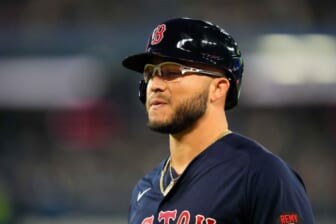 While Carlos Carrasco heading to the IL and Taijuan Walker’s back issues may open the door to the team needing a starting pitcher, the organization is more likely to send up a more proven talent from their Triple-A ranks.

Chance of being called up: Unlikely