The New York Mets placed slugger Pete Alonso on the 10-day injured list with a sprained right hand prior to Friday’s game in Miami against the Marlins.

The move was retroactive to Wednesday. Alonso has been bothered since being hit on the hand by a pitch against the St. Louis Cardinals on May 5.

“I gave it my all every single day not feeling right and trying to help this team win,” Alonso said. “I feel like I’ve been productive to a certain point.”

“He does have a sprain in his right hand and right now, it is bothering him to swing,” Rojas said. “So we went ahead and put him on the IL and he will get treatment.”

Alonso, 26, was trying to fight through the issue and didn’t inform the Mets of the injury until Wednesday.

The star first baseman said he realized it wasn’t getting better. 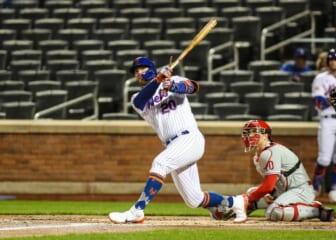 “In order for us to get where we need to go, me being healthy, completely healthy, is going to help this team win a championship,” Alonso said.

Alonso is batting .236 with six homers and 19 RBIs in 36 games. Two seasons ago, he led the majors with 53 blasts while winning National League Rookie of the Year honors.

New York also placed right-hander Tommy Hunter (back) on the IL on Friday. That move also is retroactive to Wednesday.

Also, Rojas said no decision has been made on whether Jacob deGrom’s next start on Tuesday will come with the Mets or at a minor league affiliate. The right-hander is working his way back from a lat injury and made a rehab start for Class-A St. Lucie on Thursday.