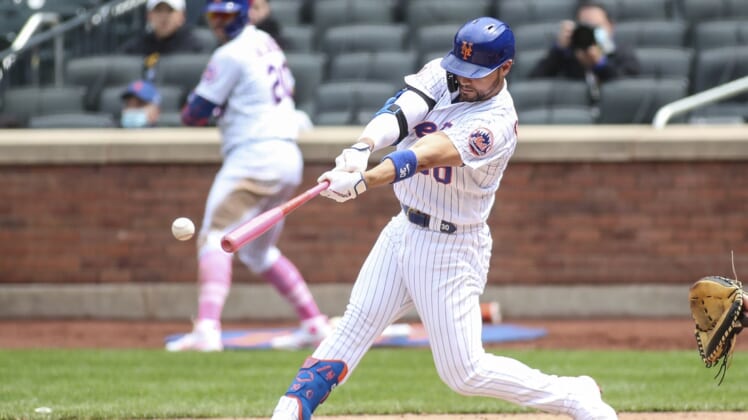 Jacob deGrom exited after five innings due to tightness in his right side Sunday afternoon, but a trio of pitchers helped the host New York Mets record a 4-2 win over the Arizona Diamondbacks.

The Mets have won five straight after completing a sweep of the Diamondbacks, who were outscored 33-12 on their six-game road trip.

deGrom, who was scratched from his scheduled start Tuesday due to a sore right lat, set down the first 12 batters he faced on just 39 pitches. The two-time National League Cy Young Award recipient labored in the fifth, when he appeared to grimace a handful of times while allowing one run — on a double-play grounder by Nick Ahmed — on one hit and three walks.

With the Mets ahead 2-1, deGrom struck out in the bottom of the fifth and took two warmup tosses prior to the top of the sixth before catcher James McCann motioned to the dugout. After a visit with manager Luis Rojas and a trainer, deGrom walked off the field and into the clubhouse. The Mets said the exit was precautionary.

Miguel Castro allowed a pair of baserunners but wriggled out of trouble in a scoreless sixth.

Jacob Barnes permitted two hits — including a solo homer by Asdrubal Cabrera — and threw 40 pitches in 1 1/3 innings, including 16 pitches in an at-bat against Pavel Smith that ended with a strikeout.

Edwin Diaz struck out three and allowed one hit in converting his fifth save of the season. It was the second five-out save of Diaz’s career and his first since Aug. 26, 2016.

Pinch-hitter Patrick Mazeika drew a bases-loaded walk in the sixth and Dominic Smith added an RBI single in the seventh. Conforto had two hits.

Riley Smith allowed two runs on four hits and one walk while striking out one over four innings.