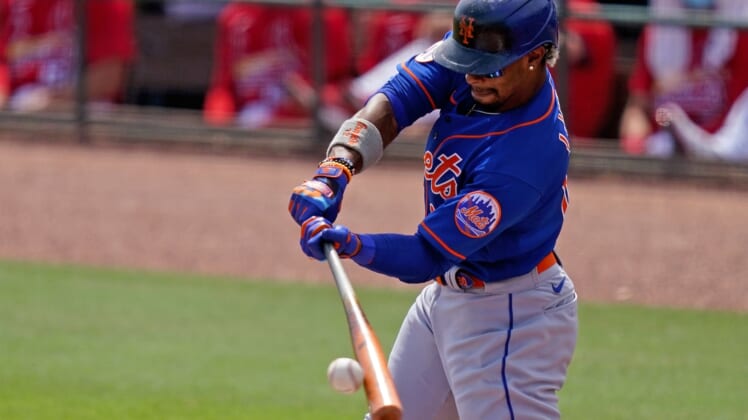 After watching everyone else for four days, the New York Mets finally take the field for real on Monday.

New York visits the Philadelphia Phillies after having its three-game set against Washington postponed due to COVID-19 issues with the Nationals.

The Mets remained in Washington and conducted workouts before heading to Philadelphia on Sunday night to begin the three-game series.

“Once we got word of what happened, there was a little bit of disappointment,” New York third baseman J.D. Davis said. “But at the same time, we were fortunate enough because it was just a couple games that got postponed. The season is still going on, and we’re still all together and ready to play baseball.”

Mets ace Jacob DeGrom will face a Phillies team that opened the season with a three-game sweep against Atlanta.

Phillies starters Aaron Nola, Zack Wheeler and Zach Eflin combined for a 1.31 ERA with 24 strikeouts and three walks in the team’s opening series.

Alec Bohm delivered a go-ahead RBI single in the eighth inning of Sunday’s 2-1 victory over the Braves, who scored a total of three runs in the series.

The Mets’ ace deGrom has won two Cy Young Awards in the last three seasons and could add to his trophy case this season. The dominant 32-year-old owns an 8-1 record and 2.38 ERA in 17 career starts against the Phillies.

Bryce Harper is 11-for-38 with two homers against deGrom, while J.T. Realmuto has just four hits in 25 at-bats.

The Phillies will counter with left-hander Matt Moore, who is returning to the majors after pitching in Japan last season. The 31-year-old is 0-2 with a 6.75 ERA in three career games against the Mets.

Francisco Lindor is 8-for-13 with a homer against Moore, who has battled control issues throughout his career but had 14 strikeouts against four walks in 15 2/3 innings during spring training.

Lindor is eager to make his Mets debut after signing a 10-year, $341 million contract last week. The four-time All-Star is a career .285 hitter with 138 home runs and 99 stolen bases over six seasons.

The Mets are keeping their original pitching plans in place, with Marcus Stroman and David Peterson set to follow deGrom.

Fifth starter Joey Lucchesi will be available out of the bullpen for the first two games of the series and could have his first start pushed back if the Mets decide to have deGrom start the team’s fifth game.

Philadelphia’s starting pitching has received the headlines, but the bullpen has been equally impressive early.

After posting a Major League-worst 7.06 ERA last season, worst in baseball since 1930, the Phillies’ bullpen has pitched 7 1/3 scoreless innings in the season’s first three games.

Jose Alvarado struck out two batters in a scoreless eighth inning in Sunday’s win over Atlanta before Hector Neris worked a scoreless ninth for his first save over two appearances.

“We in the dugout can feel the confidence from the guys coming into the game from the bullpen,” Phillies first baseman Rhys Hoskins said. “They’re attacking hitters right away and that is noticeable in the field, in the dugout, wherever it is.”