The New York Mets could be in serious trouble heading into the start of the season this week with the news that big-ticket free-agent addition Max Scherzer may not be available on opening day.

The Mets are already reeling from the Friday revelation that pitching ace Jacob deGrom will be sidelined for at least the next month due to a stress reaction in his pitching shoulder. The issue came up while the three-time Cy Young award winner was throwing long-toss on Thursday in preparation for his upcoming start on Friday.

Oddly enough, a similar predicament has now occurred with the team’s next best starter Max Scherzer. On Saturday, the nine-time All-Star informed reporters that he started to develop tightness in his hamstring a few days ago, and the problem returned this afternoon while getting ready to take part in a simulated game.

Not only is he now out of that pitching session, but he also revealed he is uncertain if he will be ready for the start of the season this week and listed himself as day-to-day. At this point, new manager Buck Showalter and the team’s executive’s heads have to be spinning after the injury news double whammy they have received over the last two days.

Scherzer would have likely slotted into the opening day spot left open by deGrom. Now it is up in the air on who will take the ball when the team starts the regular season on the road Thursday, April 7, against the Washington Nationals. 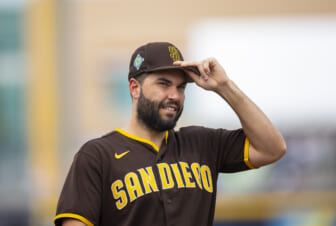 Earlier on Saturday, rumors suggested the team could be close to finalizing a deal to send first baseman and designated hitter Dominic Smith to the San Diego Padres for veteran 1B Eric Hosmer and starting pitcher Chris Paddock. Now, with the early evidence of the dangers of having a very expensive 37-year-old in one of the top spots of the rotation, bringing in the three-year veteran Paddock may now be a necessity.