A wide variety of names have emerged as potential candidates since the New York Mets announced Luis Rojas will not return as the team’s manager.

One name on most lists is Houston Astros bench coach Joe Espada, who has been installed as the 4-1 favorite to become the Mets’ next manager by SportsBetting.ag. Espada spent three years on Joe Girardi’s staff with the cross-town Yankees and has interviewed for openings with the Chicago Cubs, San Francisco Giants and Texas Rangers in the past few years.

Espada would be a first-time manager, as would former Mets outfielder Carlos Beltran (5-1), who previously was hired to the post in 2019. The Mets and Beltran parted ways shortly thereafter following the latter’s implication in the Houston Astros’ sign-stealing incident from 2017. Alex Cora and A.J. Hinch, who also had roles in the incident, have since received second chances. 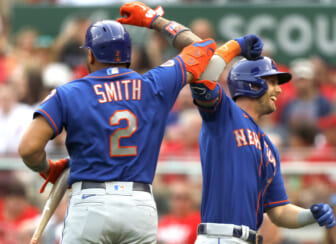 The next-shortest odds at the sportsbook belong to veteran managers Ron Washington (6-1), Buck Showalter (8-1), Brad Ausmus (9-1) and Bruce Bochy and John Gibbons at 10-1.

Washington, 69, is currently the Atlanta Braves’ third base coach after managing Texas to a pair of American League pennants from 2007-14.

Showalter, 65, has not managed since parting with the Baltimore Orioles in 2018 but expressed interest in the Mets’ job after Mickey Callaway was fired in 2019. He has led three different teams to the postseason.

Ausmus is younger at 52 years old and has managing experience from four seasons with Detroit and one with the Los Angeles Angels. He owns a 386-422 record as a manager and was in the running for the Astros’ job two years ago.

Bochy, 66, won three World Series as a manager with the Giants before stepping away in 2019.

Gibbons played for the Mets as a catcher began his managerial career in the franchise’s minor league system. He later led Toronto to consecutive appearances in the ALCS as a manager in 2015-16.