New York Mets ace Jacob deGrom, the top pitcher in baseball, said Wednesday that he will not play in next Tuesday’s All-Star Game in Denver.

The 33-year-old deGrom made the announcement after Wednesday’s 4-3, eight-inning victory over the Milwaukee Brewers in the first game of a doubleheader.

“I’ve thought about it and obviously being named to an All-Star Game is a great honor but I’m just going to take that time and spend it with my family and get healthy for the second half,” deGrom said.

The right-hander struck out 10 in seven innings but wasn’t involved in the decision. He gave up two runs and four hits to see his ERA rise to 1.08.

It is possible that deGrom could start Sunday against the Pittsburgh Pirates in the final game before the All-Star break. Regardless, he said that not going to the All-Star Game was the right decision.

“It’s best for me and this team for me to not go and rest for the second half,” deGrom said. 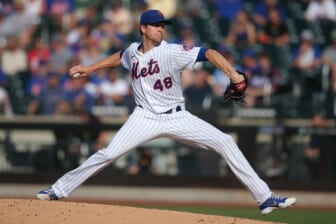 The two-time National League Cy Young Award winner is enjoying a season for the ages. He has a 7-2 record in 15 starts and has struck out 146 and allowed just 39 hits in 92 innings.

deGrom would have been an overwhelming favorite to start the game for the NL.

While announcing his decision, deGrom lobbied for teammate Taijuan Walker to be his replacement. The right-handed Walker is 7-3 with a 2.44 ERA in 15 starts in his first season with the Mets.

deGrom was the only New York player named to the original roster so Walker certainly has a chance to be added to the NL roster.