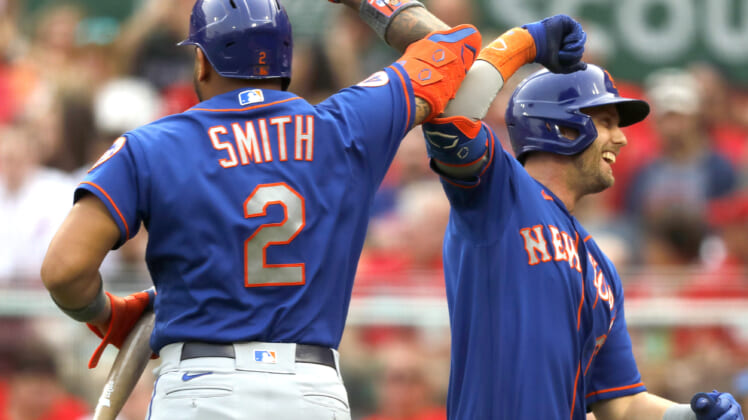 The New York Mets will be absent from the MLB playoffs for the fifth consecutive season. A summer that began with the Mets being in the driver’s seat to win the NL East concluded with them ensuring back-to-back losing seasons.

Surely, Jacob deGrom missing the second half of the season was a catalyst for the Mets’ second-half collapse, but it wasn’t the Grim Reaper of their season, if you will. What ultimately led to New York coming up short was the disappointing seasons put forth at the plate by Jeff McNeil and Dominic Smith.

Here’s how the pair of homegrown players doomed the Mets’ 2021 season.

One year ago, McNeil was one of the best pure hitters in MLB. He put the ball in play at a high level thanks to a level, compact swing. McNeil was also a considerable power threat who found tremendous success at the top of the Mets’ order.

He set the table for those behind him and was a reliable .300 hitter. Back to the present and McNeil is in the midst of the worst season of his big-league career.

McNeil is getting on base at a low clip while his power has vanished and Mets’ manager Luis Rojas has dropped him in the order. The former is no longer someone the Mets can look to as a fixture.

While Smith didn’t have a complete season under his belt, he did have an MVP ballot-worthy 2020 campaign; he hit .316, posted a .993 OPS and totaled 42 RBIs as a consistent everyday player. He was slugging well, serving as a lethal threat in the batter’s box and perhaps the most encouraging aspect of the 2020 Mets. This season he has been unrecognizable.

Smith is supposed to be a power threat from the left side, as well as someone who can drive in those on base in front of him. Instead, he has been a starting-caliber player and little more who has taken a step back from both an impact and production standpoint.

Francisco Lindor, Javier Baez were a shield for Jeff McNeil and Dominic Smith

Why have the struggles of McNeil and Smith been subsidiary concerns for the Mets? There are two reasons for this, the first being Francisco Lindor and the second being Javier Baez. New York acquired Lindor from the Cleveland Indians and later extended him on a $341 million deal. From that moment on, Lindor and the Mets haven’t been able to click at the same time.

For the first three months, Lindor, who has been one of MLB’s best shortstops over the last five years, struggled mightily, as his batting average hovered around .200. Then when he began hitting and driving the ball with more consistency, the Mets lost control of the NL East to both the Atlanta Braves and Philadelphia Phillies. Of late, Lindor has been raking, and the Mets have been losing.

Baez was acquired at the MLB trade deadline to provide the Mets with a much-needed formidable hitter. He was certainly such a threat at the plate for New York, but he also found a unique way to rile up the fanbase.

After an August 29 victory against the Washington Nationals, Baez said that the fans “gotta be better.” He mentioned how Mets players doing a thumbs-down gesture during the game was them expressing displeasure with the fans booing them. Marcus Stroman, Taijuan Walker and Kevin Pillar later took to Twitter to essentially mock fans who had a problem with Baez’ quotes, insinuating that the media was twisting his words.

How could the center of attention possibly be on a pair of underperforming players (McNeil and Smith) when Lindor is accompanying a $341 million contract with a .228 batting average and the team is expressing displeasure with its fans? You can’t make this stuff up.

McNeil was an indispensable piece to the present and future of the Mets. Him taking an enormous step backward took the team backward. Smith was a player on the rise providing the Mets with a potent left-handed hitter. This season he was part of the bevy of players who couldn’t make headway at the plate.

Every team is going to have players who underperform, but a ballclub can’t afford for its foundation to get scratched. That’s what happened to the Mets this season, and it led to their demise. Pete Alonso had his ups and downs but was his typical self all season: an impact power hitter.

McNeil is supposed to be the sure thing for the Mets, and Smith was finally playing into his former top prospect label. For better or worse, the Mets were one of the better offensive teams in MLB in both 2019 and 2020. Plus, their rotation was still respectable without deGrom this season. Marcus Stroman had a superb season. For most of the season, Taijuan Walker was a sturdy force. Tylor Megill and Rich Hill had their moments.

The NL East was for the taking at every leg of the season for the Mets with the Braves losing Ronald Acuna Jr. (torn ACL) and Marcell Ozuna (domestic violence investigation), the Phillies being volatile and the Washington Nationals and Miami Marlins selling.

There are enough unknowns as is for the Mets moving forward (the future of their manager, front office and own free agents). Now they have another question to ponder: are McNeil and Smith long-term everyday players?