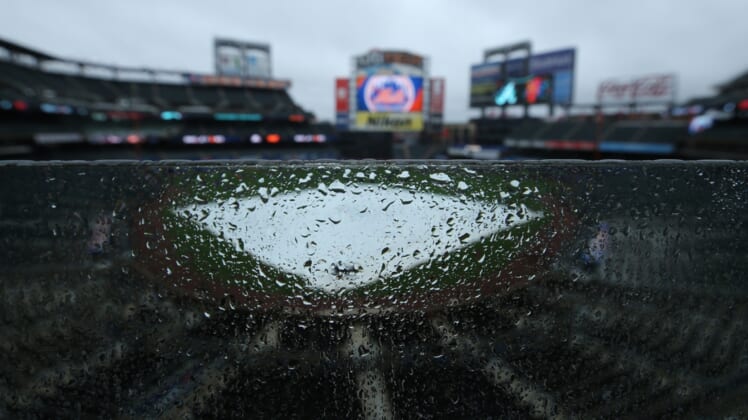 May 30, 2021; New York City, New York, USA; General view of a tarp on the field as rain falls at Citi Field. Tonight’s game between the New York Mets and the Atlanta Braves has been postponed due to inclement weather. Mandatory Credit: Brad Penner-USA TODAY Sports

Rain continued to pound the New York metro area Sunday, forcing the postponement of a game between the New York Mets and Atlanta Braves for the second time in three days.

The game, originally scheduled for ESPN’s “Sunday Night Baseball” broadcast, was moved to July 26 at 5:10 p.m. as part of a single-admission doubleheader, according to the Mets.

In addition, the Mets-Braves game that was rained out Friday will be made up June 21 as part of another single-admission doubleheader.

Originally scheduled to play three games in Queens this weekend, Atlanta and New York only managed to get in Saturday’s game according to schedule — a 13-2 Mets victory.

The postponements just keep coming for the Mets, who now have had 11 games pushed back due to either bad weather or an opponent’s outbreak of COVID-19. As a result, they have doubleheaders of two seven-inning games apiece now slated for June 19, 21 and 25 — a total of nine games in a seven-day span.

They’ll play one doubleheader against three separate National League East opponents in that time: at the Washington Nationals, then at home against the Braves and Philadelphia Phillies.