May 18, 2021; Atlanta, Georgia, USA; New York Mets outfielder Kevin Pillar supports teammates after he was hit in the face with a ball suffering a nasal fracture the night before against the Atlanta Braves at Truist Park. Mandatory Credit: Jason Getz-USA TODAY Sports

Pillar is back just two weeks after taking a 94 mph fastball to the face May 17. Pillar underwent surgery for multiple nasal fractures.

Alonso was placed on the IL May 18 with a right wrist sprain. Lugo, the Mets’ setup man, has yet to make his 2021 debut after requiring offseason elbow surgery. 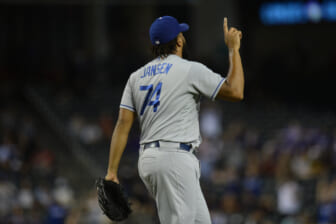 Pillar, a nine-year veteran, owns a .250 batting average with a pair of homers and eight RBIs to go with 10 runs scored in his 28 appearances this year.

Prior to these moves, the Mets had 17 players on the injured list, most in the majors.