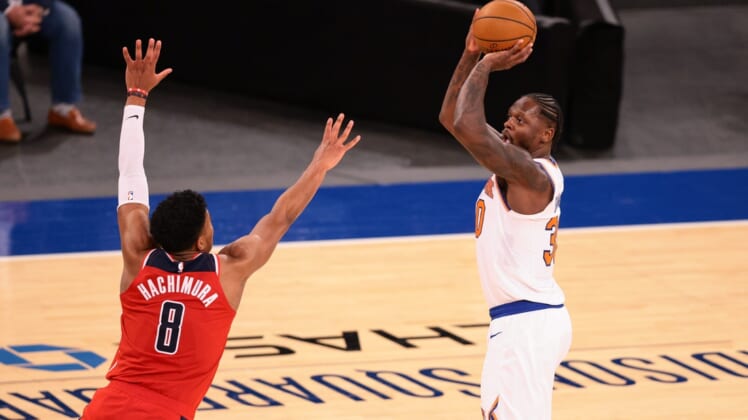 Completing a season sweep of a perennial championship contender Wednesday night served to remind the Dallas Mavericks they’re doing something right while trying to regain their status as one of the Western Conference’s top teams.

Failing to close out a sweep of the NBA’s worst team reminded the New York Knicks how far away they are from completing a rebuilding project.

The Mavericks will look to edge closer to a top-six seed in the Western Conference and the Knicks will hope to hang on to at least a share of a guaranteed playoff spot Friday night, when New York hosts Dallas in the first meeting of the season between the teams.

Both teams were off Thursday after road games Wednesday, when the Mavericks never trailed in a 113-108 win over the Boston Celtics and the Knicks squandered a 13-point fourth-quarter lead and fell to the Minnesota Timberwolves, 102-101.

It was the second straight wire-to-wire win for the Mavericks, who led by 23 in the third quarter before staving off a furious late rally by the Celtics, who closed within two in the final minute of the fourth before Jalen Brunson drained four free throws in the final 11 seconds. Brunson also hit Dallas’ only field goal in the last two minutes.

“I thought when things got a little hairy down the stretch, the great thing we did was keep our poise,” Mavericks coach Rick Carlisle said. “We were able to get fouled, make free throws and get a key basket when we needed.”

The sweep of the Celtics was the first for the Mavericks since the 2015-16 season. Dallas made the playoffs just once in the subsequent four seasons while going 1-7 against Boston, which advanced to the Eastern Conference finals three times.

The Mavericks (25-21) entered Thursday in seventh place in the Western Conference, 3 1/2 games behind the sixth-place Portland Trail Blazers.

The Knicks (24-24) have played far better than usual this season. New York, which hasn’t made the playoffs since the spring of 2013, has already won three more games than it did last season and will enter Friday in a tie for fifth place in the Eastern Conference.

But with such a thin margin for error in the Eastern Conference playoff race — only five games separate the fourth- and 10th-place teams — the loss Wednesday could be a costly one for the Knicks. They led by as many as 18 in the second quarter and went more than 43 minutes without trailing until Malik Beasley hit what proved to be the game-winning 3-pointer with 37.8 seconds left.

The Knicks were outscored 17-7 over the final 6:54, a span in which they were 2-of-11 from the field and committed three turnovers.

“You let your guard down just a little bit, you’re going to be in trouble,” Knicks coach Tom Thibodeau said. “There’s 30 teams — 29 capable of beating you if you don’t come with that edge, with the mentality to play 48 minutes. If you get loose, you’re going to get knocked down.”