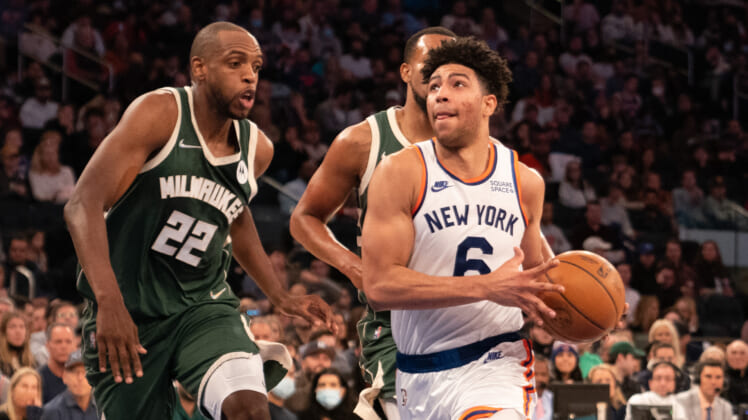 Despite the New York Knicks’ monotonous 17-18 start, there have been some pleasant developments for head coach Tom Thibodeau. Those positives are rookies Quentin Grimes and Miles McBride.

Due to a combination of health issues and severe rotation shakeups (e.g. Kemba Walker not playing for three weeks), Grimes and McBride have recently taken on larger roles to the point where the Knicks often have at least one of them on the floor at the end of games. The two players are making the most of their minutes and giving the front office something to think about.

Here’s how the pair of rookies are impacting New York’s future.

Grimes was a shooting scorer who defended well at the University of Houston; his game has transitioned well to the NBA.

Grimes has been a reliable “three-and-d” player for the Knicks. He has been a willing and gradually improving outside shooter. Meanwhile, he has occasionally put the ball on the floor while serving as a defensive pest.

On the whole, Grimes’ production isn’t astonishing because he has only been a consistent rotation player for a month and was derailed by health and safety protocols following a 27-point outburst. Since being inserted into the rotation, he has been a productive force.

Grimes has a skill set that fits in any NBA rotation and role. He can be a starting wing who stretches the floor for the team’s top scorers and assists them in defending the perimeter. On the other hand, he can provide jolt scoring off the bench. Grimes is finding success in both roles with the Knicks. 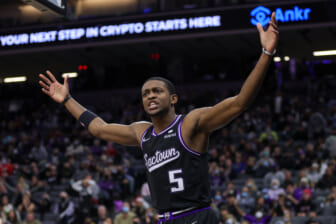 McBride was a do-it-all guard at the University of West Virginia, and he’s coming into his own as a scrappy, two-way player with the Knicks.

Despite playing in just 11 games, McBride is making a tangible impact on their operation. He’s getting points off the dribble, finding his teammates for open looks, hitting the boards and pick-pocketing defenders at a high rate. McBride takes what the defense gives him and is an alert player.

Like Grimes, McBride began the season at the end of the bench but has recently seen an uptick in minutes. Then after a breakout game against the Houston Rockets, he was put into health and safety protocols.

In a pinch, McBride can start at either guard position. He’s accustomed to handling the rock as a lead guard and is finding success in an off-the-ball role with the Knicks.

Grimes and McBride have plug-and-play skill sets, which is why they’ve been steady forces for the Knicks. With that in mind, the rookies’ play gives president Leon Rose more trade flexibility.

The Knicks have been a prime candidate to pull off a blockbuster trade for two years. The time is approaching for them to make that trade considering the development of their young players and the team being off to a disappointing start after claiming the fourth seed in the Eastern Conference last season. New York has all the tools to pull off a trade of this magnitude. They have a bevy of compelling young players (RJ Barrett, Immanuel Quickley, Obi Toppin and Mitchell Robinson) and four first-round draft picks over the next two years. 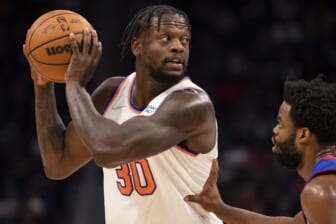 Grimes and McBride give New York the ability to move a reliable player they may otherwise prefer to keep. Whether it means a trade for De’Aaron Fox, Myles Turner or an offseason sign-and-trade for Bradley Beal, the Knicks have an amplitude of depth to be able to move on from key contributors.

The rookies aren’t having a star impact or becoming the foundation of the Knicks’ future. That said, they’re showing that they belong through their reliable and efficient play. Thibodeau seems to be taking heed to their play, as both of them are maintaining high-minute roles with the team nearly back at full strength. They’re capable of playing 20-plus minutes per contest and can only improve with reps.

Quentin Grimes and Miles McBride are helping the Knicks in the present while opening up future opportunities for the organization on the trade market.