Dec 22, 2017; Detroit, MI, USA; A view of the Knicks logo on a players jacket during the national anthem prior to the game against the Detroit Pistons at Little Caesars Arena. Mandatory Credit: Aaron Doster-USA TODAY Sports

The Knicks’ newest addition, Argentine point guard Luca Vildoza, is headed to New York on Friday ahead of the team’s playoff matchup at home Sunday vs. the Atlanta Hawks

According to a Spanish-language Twitter account run by his press team, the 25-year-old Vildoza is heading to the U.S. to “adapt” and will wear the No. 17 jersey — the number of former Knicks point guard Jeremy Lin, aka “Linsanity.”

Earlier this month, Vildoza signed a four-year deal worth a reported $13.6 million deal.

One of Europe’s premier playmakers, the 6-3 Vildoza had been playing in Spain with Baskonia, where he led his team to a championship was named MVP of the 2020 Spanish ACB finals.

This season, he averaged 10.1 points per game on 41 percent shooting in 25.2 minutes per game. He was also shooting 38 percent from beyond the arc. 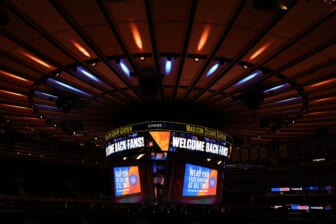 Internationally, Vildoza has helped Argentina win a gold medal at the 2019 Pan American Games and silver medals at the 2019 FIBA Basketball World Cup and 2017 FIBA AmeriCup.

Knicks coach Tom Thibodeau said recently that Vildoza was unlikely to play during the postseason although he is eligible to participate in the playoffs.