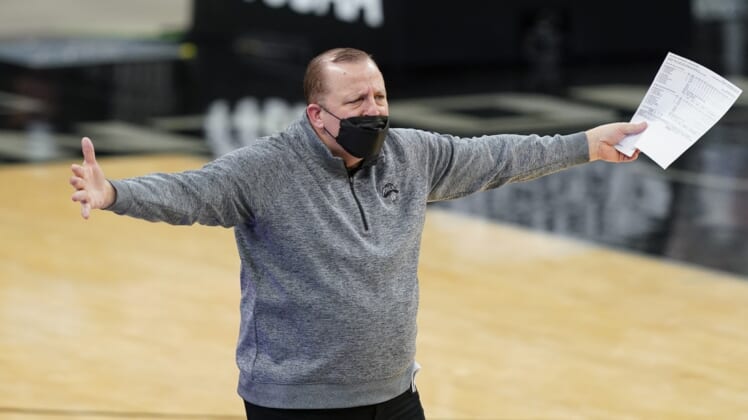 A loss Monday night underlined what the New York Knicks need to do to maintain their surprisingly winning ways. A narrow defeat for the Minnesota Timberwolves served as a reminder that a rebuilding team can still compete with the NBA’s best.

The Knicks will look to bounce back from an atypical defeat Wednesday night, when they visit the Timberwolves in Minneapolis, Minn., in the final game of the season between the nonconference foes. The host Knicks won the first meeting, 103-99, on Feb. 21 behind Julius Randle’s 25 points and 14 rebounds.

Both teams were off Tuesday after losing Monday, when the host Knicks fell to the Miami Heat 98-88, and a late comeback bid by the visiting Timberwolves came up just short as they were defeated by the Brooklyn Nets 112-107.

The loss snapped a three-game winning streak for the Knicks, who will enter Wednesday amongst the Eastern Conference top six seeds as they seek to make the playoffs for the first time since the spring of 2013.

New York is allowing an NBA-low 104.6 points per game in coach Tom Thibodeau’s first season after surrendering an average of 112.3 points per game last season, which was tied for the 12th-most allowed in the NBA. But the Knicks’ defensive effort wasn’t as stout as usual Monday, when the Heat scored 39 points in the third quarter and finished with a 48-41 rebounding edge.

It was just the third time in the last 29 games the Knicks have been outrebounded by at least six and the first time in a loss since New York fell to the Utah Jazz, 108-94 on Jan. 26.

“When we’re not making shots the way we want to, we’ve got to be able to tighten up on the defensive end and get stops, which we didn’t in the third quarter,” Randle said. “And then they controlled the glass, which I have to do a better job of. Everything they did to beat us, we felt like it’s on us and manageable.”

The Timberwolves have the worst record in the league at 11-36, but they were encouraged Monday by a bounce-back effort against one of the NBA’s best and most potent teams.

Minnesota was coming off a 129-107 loss Saturday to the Houston Rockets, who are 2-23 since Feb. 6. On Monday, though, the Timberwolves almost overcame a 17-point deficit against the Nets, who have won 18 of 21, and had chances to take the lead or tie the score in the final half-minute.

Anthony Edwards missed a potential go-ahead jumper with 20 seconds remaining and Malik Beasley missed a 3-pointer 10 seconds later that could have knotted the game at 110.

“Tonight we came ready to play and it showed,” Edwards said “We didn’t come out with a win, so I don’t think anybody should be satisfied with that, but, I mean, we competed.”

The game will mark Thibodeau’s first trip to Minnesota as a head coach since he was fired as the team’s head coach and president on Jan. 6, 2019. Thibodeau directed the Timberwolves to their only playoff berth in the last 17 years in the spring of 2018, when they fell to the Rockets in five games in the first round.