When New York Jets quarterback Zach Wilson let his wide receivers know this year’s spring training retreat would take place in Idaho, some of them didn’t even know where that was.

Starting QBs conducting offseason workouts with their receiving corps. is nothing new, and has become a tradition for many passing games throughout the NFL. Despite barely being in his 20s, Wilson made a point of following that trend in his rookie season for the Jets in 2021.

Last year, the 22-year-old set up a special retreat with his new teammates that took place in Miami, Florida. A smart choice as a locale for a bunch of football players to meet up, get to know each other and have some fun. However, in year two, the BYU alum decided to mix it up and go with a very remote location in the spring of 2022. Idaho to be exact. A state with a population an eighth the size of New York City.

It was a place so obscure to his teammates that a few had no idea where they were going, and even though they might be boarding a flight for the great white north.

While Idaho seems like an odd choice, in the end, it proved to be a very productive trip for the players. And Wilson says it did a lot to help build a bond of trust between them. A trust that’s built not just on a love of football and winning, but care beyond the field from a player that has to become a leader on a football team.

“They start to look up to you and ask you questions and try to lean on together. It’s really like we’re there for each other and that’s what you really got to show. That’s really what the Idaho trip was for, for us to spend some time together, show I care about them and I get to know them and all the little details about their lives and they can trust me on the field,” Wilson said. 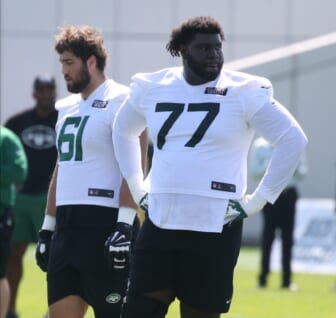 The New York Jets receiving corp. will be a group of 20-somethings led by first-round pick and Ohio State standout Garrett Wilson. The Jets begin the preseason on Aug. 12 in a matchup with the Philadelphia Eagles.