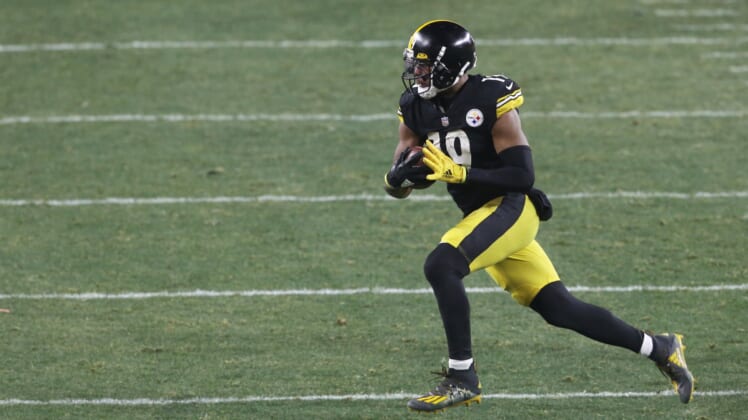 New York Jets rumors have been everywhere this offseason, with the team active in free agency and discussing a Sam Darnold trade. Speaking of Darnold, as the organization remains divided regarding his future in New York, the Jets might be looking to add one of his former college teammates.

But there is even more money left for the Jets to spend. With the 2021 NFL Draft months away and a roster overhaul just beginning, Douglas could be working towards another huge free-agent addition.

According to NFL Network’s Ian Rapoport, the Jets are having conversations with Smith-Schuster. While the exact nature of the discussions aren’t known, New York is interested in adding the talented wide receiver to its offense for the 2021 season.

The 24-year-old isn’t returning to Pittsburgh. While he was one of Ben Roethlisberger‘s favorite targets, Pittsburgh doesn’t have the cap room to afford him. So, even in a free-agent market that has been slow for pass-catchers, Smith-Schuster will be playing elsewhere next season.

He isn’t the same player who made the Pro Bowl in 2018, recording 111 catches for 1,426 receiving yards and seven touchdowns. Smith-Schuster greatly benefited from playing alongside Antonio Brown during that time. Since Brown’s departure, his stats have plummeted.

In 2019, Smith-Schuster dealt with Pittsburgh’s backup quarterbacks. He played in only 12 games, snagging 42 receptions for 552 receiving yards, three touchdowns and averaging 13.1 yards per catch. When Big Ben returned last season, with a weaker arm, the 6-foot-1 wideout became a chain mover. He averaged just 8.6 yards per reception, finishing the year with 97 receptions, 831 receiving yards and nine touchdowns.

In New York, Smith-Schuster would operate out of the slot, serving as a complementary weapon to Davis and Denzel Mims. He wouldn’t see the number of targets (128) he drew last season, but offensive coordinator Mike LaFleur uses a quarterback-friendly scheme that puts receivers in positions to get open as playmakers.

Even if the Jets sign Smith-Schuster, it shouldn’t be seen as an indication of Darnold’s future. That decision will come in April, when Douglas finalizes his evaluations of the quarterbacks from the 2021 NFL Draft. Ultimately, we expect Darnold to be traded and Zach Wilson to be the No. 2 overall pick.