Quarterback Mike White will make his third straight start for the New York Jets on Sunday against the visiting Buffalo Bills.

Jets coach Robert Saleh made the announcement Wednesday, sticking with White as rookie No. 2 overall pick Zach Wilson continues his recovery from a knee injury.

Veteran Joe Flacco, acquired in a trade late last month with the Philadelphia Eagles, is expected to serve as White’s backup when the Jets (2-6) host the Bills (5-3).

White, 26, made his NFL debut in Week 7 at New England when Wilson went down with a PCL strain in his right knee. 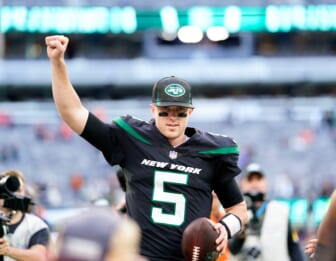 White became an instant fan favorite in Week 8 when he completed 37 of 45 passes for 405 yards, three touchdowns and two interceptions in a 34-31 victory over the Cincinnati Bengals in his first career start.

Last Sunday, White suffered a nerve contusion in his right forearm during the first quarter of a 45-30 loss against the Indianapolis Colts. He was replaced by journeyman Josh Johnson.

White has completed 72.7 percent of his passes for 702 yards with five touchdowns and four picks in three games.

Wilson, 22, has completed 57.5 percent of his passes for 1,168 yards with four TDs and nine interceptions in six games.