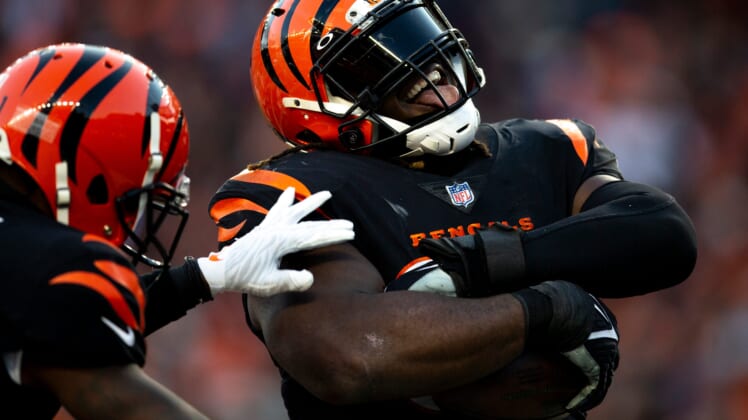 The New York Jets offseason saw the front office improve the roster significantly, adding potential impact talent on both sides of the ball. With training camp approaching, New York might still have a few moves up its sleeve to improve Robert Saleh’s defense.

Defensively, the Jets were one of the worst NFL teams in 2021. New York allowed the fifth-highest yards per play (5.9) and the highest scoring drive rate (48.9%). Not only did the Jets struggle rushing quarterbacks (sixth-worst pressure rate, 21.4%), but they also allowed the fourth-most rushing yards (138.3) per game.

The hope is that a healthy Carl Lawson and the addition of first-round picks Jermaine Johnson II and Ahmad “Sauce’ Gardner solve some of the issues. With some money left to spend, though, New York could be eyeing a few of the top free agents remaining.

According to Connor Hughes of The Athletic, the Jets are very interested in defensive tackle Larry Ogunjobi and linebacker Kwon Alexander. However, the club is waiting for the veteran talents to make a decision about where they want to play.

While there might be a bit of a bidding war for both players and each of them might prefer to sign with a playoff contender, either addition would be a nice boost for the New York Jets defense.

Larry Ogunjobi already signed a contract this offseason. He agreed to a three-year, $40.5 million deal with the Chicago Bears in March. However, the deal was voided after he failed his physical.

Months removed from that, the 27-year-old defensive tackle should be healthy and in better football shape. New York could bring him in for a workout, finding out if the 6-foot-3 lineman checks out physically before agreeing to contract terms.

There would certainly be a spot for him. Sheldon Rankins (46.1 PFF grade) was one of the worst defensive linemen in the NFL against the run this past season. It further highlighted why he is nothing more than a rotational interior tackle in passing situations. While Ogunjobi also struggled against the run in 2021, he is a more effective interior penetrator and there is reason to believe he can be a more stout defender against the run with the right coaching staff.

He’s headed for a one-year contract, needing to prove himself before testing the market again. Given New York’s need for depth on the defensive line, it could be a solid fit.

Familiarity is important in the NFL. Connections don’t just help coaches land jobs, they are also beneficial for veteran players looking for an opportunity. While Kwon Alexander is no longer the Pro Bowl version of himself from the 2017 season, his connection with Saleh makes a signing possible.

“I was with Kwon. Love him to death. When you talk about all-gas .. he’s phenomenal”

The Jets need reinforcements at linebacker. C.J. Mosley was awful last season, a huge liability against the run and non-existent dropping back in coverage. While it’s possible he could turn things around, becoming the player we saw in 2019, competition is necessary.

Alexander could step in and make an impact as an off-ball linebacker. He held opposing quarterbacks to an 85.6 passer rating when they threw towards him in coverage, per Pro Football Focus. Reuniting with Saleh would also put the 6-foot-1 linebacker back with a defensive mind who knows how to best utilize his skills.

Considering Jamien Sherwood, Hamsah Nasirildeen and Quincy Williams are poised to play significant snaps in 2022 for New York, Alexander would be an upgrade for Saleh’s defense.