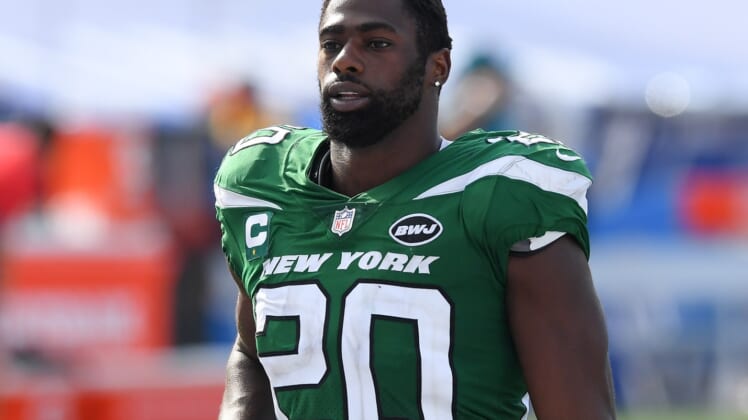 The New York Jets have a ton of salary cap space to play with this offseason, which should mean safety Marcus Maye should be able to stay with the team for the foreseeable future, according to general manager Joe Douglas.

In his first direct public remarks on the matter of Maye getting a long-term contract extension, Douglas seemed confident a deal would get done, as opposed to resorting to the franchise tag.

Douglas shared his thoughts on Maye’s future and how it’s continued to be a top priority when it comes to New York retaining its key free agents, per official team reporter Ethan Greenberg:

We have had productive conversations with his representatives. Our stance on Marcus hasn’t changed as well. Marcus is a valuable member of this organization. Someone that started his career here, someone that’s been a pro’s pro. He’s smart, reliable and has provided outstanding leadership. Our plan hasn’t changed. We’re in the process of working to have Marcus be here long term.

Maye was one of the few bright spots from last year’s 2-14 Jets team. Pro Football Focus graded him as the fifth-best safety in all of football, which further vindicated the blockbuster trade that sent All-Pro defensive back Jamal Adams to Seattle in exchange for two first-round picks.

Given that Robert Saleh, the team’s new head coach, was a defensive coordinator in San Francisco at his last stop, it stands to reason he’d like to retain as many quality defenders as possible if New York has them. Maye and defensive lineman Quinnen Williams are the two premier young cornerstones on that side of the ball.

With plenty of money to spend elsewhere in free agency, it’d make a lot of sense for Douglas to strike a deal with Maye, who’s certainly earned his way to a strong payday, especially when considering how well he played last season when he could’ve phoned it in as part of such a bad team.

Marcus Maye is a no-brainer extension for New York Jets

There aren’t many other pending free agents Gang Green would agonize about losing, particularly with six picks in the top 100 of the 2021 NFL Draft, which can net numerous quality players on cheaper rookie contracts.

Standout linebacker CJ Mosley is also going to return this year to help out that position group in a big way after he opted out of the 2020 campaign.

Aside from slot cornerback Brian Poole, the Jets shouldn’t have too many other in-house priorities than to make sure Maye is in the Big Apple for years to come.

However, things got a little complicated recently on that front. Maye’s agent Erik Burkhardt took to Twitter in replying to ESPN’s Field Yates about how the Jets handled his client and, at least to date, haven’t made the appropriate effort to secure Maye’s services for the long haul:

Burkhardt may have resorted to inflammatory rhetoric, but his pointed commentary isn’t unfounded.

Without Adams to rely on next to him this past season, Maye elevated his game to a new level, with career-best totals in combined tackles (88), and passes defensed (11) to go with two sacks, two interceptions and four tackles for loss.

If he had played for a club with a better record, there’s a chance Maye could’ve actually earned All-Pro honors or at least gotten his first Pro Bowl bid. Neither happened, as he continues to be overshadowed by Adams even after the Seahawks star’s departure from New York.

In any event, the Jets have all the means at their disposal to ignite a swift turnaround in 2021. If Douglas can land a new franchise quarterback with the second overall pick and make savvy free-agent moves — including re-signing Maye, not just franchise tagging him — there’s a chance this organization could take a massive leap forward very soon.