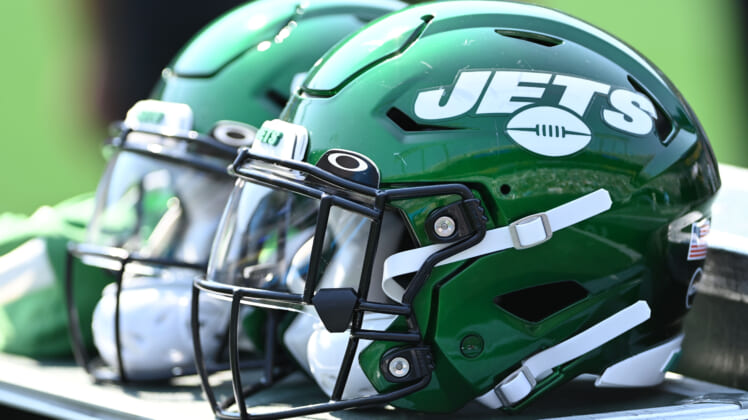 Looking to arm Zach Wilson with a more productive fleet of pass-catching targets, the New York Jets have added Tyler Conklin and C.J. Uzomah at the tight end position in free agency. Once general manager Joe Douglas heard about Tyreek Hill’s availability, the Jets put together a trade package headlined by their two second-round picks plus their 2022 third-round selection.

Of course we know now, the Jets apparently never had a chance at Hill to begin with, but the point stands, their front office is looking to improve the group of receivers around their franchise quarterback.

Having signed Corey Davis to a three-year, $37.5 million contract just a season ago, the front office likely hasn’t soured on his future yet, despite having played just nine games due to various injuries in 2021.

The same goes for 2021 second-round selection Elijah Moore, who was the team’s leading receiver with 538 yards in 11 games.

They have the large target with Davis, a slight-framed speedster Moore who likely best profiles to the slot, but they could still use a bonafide No. 1 wide receiver going forward. With all their draft capital, this could be the perfect year to land a top WR in the Big Apple.

Here are five top wide receivers the New York Jets could acquire yet this offseason.

If you believe the New York Jets may be turned off by Garrett Wilson’s size, you might be wrong. Considering the team was willing to trade for Tyreek Hill, who measured at 5-foot-8 1/8″, compared to Wilson who came in at 5-foot-11 3/4″. Sure, Wilson may not be known as “Cheetah” as Hill is, but with a 4.38 40-yard dash, the former Buckeye’s a burner.

Wilson has many of the same traits as Hill has, offering massive YAC potential thanks to stop and start quickness. He tracks the ball well, has displayed strong hands and of course, can break a game wide open thanks to his long range speed.

If the Jets find themselves feeling left out after dreaming of adding Hill to their lineup, maybe drafting Wilson is the next best thing. Doing so would give the Jets a young nucleus of offensive skill position players, adding Wilson (21), to their QB Wilson (22), Elijah Moore (22), and Michael Carter (22). Not a bad group to grow with over the next few years.

Being patient with Jameson Williams

Alright, so if Garrett Wilson is a bit on the small side for your ideal outside WR, then perhaps Jameson Williams is the perfect size-speed combo. Standing 6-foot-1 1/2″, Williams is even quicker than Wilson, but is almost two inches taller. Maybe the only reason why Williams isn’t atop everyone’s draft board at the receiver position is due to him tearing his ACL in the CFB title game, which has prevented him from doing any athletic drills in the pre-draft process.

But the film doesn’t lie, Williams has electric speed, and the explosiveness to go along with it. Not only does he run well, Williams was a hurdler in high school, where he broke several Missouri state records. He has everything you could ask for from a build perspective, and his production backs it up, finishing ranked first in the SEC with 19.9 yards per reception. Once healthy, he should be able to offer be the same downfield threat from day one at the next level too.

Maybe the Jets don’t really care about getting some of the fastest receivers available and are just looking to add bodies with upside at the WR position. Drake London out of USC is a very big body at 6-foot-3 7/8″. A former basketball player, London uses his large frame to his advantage, winning 50-50 balls, which could be a cushy safety blanket for Zach Wilson as he continues to develop.

Just 20 years old, London possesses the base skillset to become a No. 1 receiver at the next level. Some like to compare him to Bucs WR Mike Evans in that they both are tall, run with long strides and have the ability to separate thanks to solid, but not elite deep speed. Already showing an ability to beat double-teams in college, London could be the big playmaker the Jets missed in 2021.

We considered throwing Deebo Samuel on this list, and there’s been speculation suggesting a trade to the Jets could happen. This is due to him not yet signing a long-term extension to stick around in the Bay Area. The same situation repeats itself with AJ Brown.

As teams look around the league and see elite receivers such as Davante Adams and Tyreek Hill receive contracts paying them $28M and $30M per season, they have a decision to make. Is our wide receiver worth near QB money? Is he what’s helping us get to the Super Bowl?

The Titans may opt to do what the Packers and Chiefs are presumably doing, by choosing to get younger at the position, while saving a bucketful of money in the future. Oh, and the influx in draft picks isn’t so bad either.

Officially, the Titans don’t have any plans to part with their top receiver as they head into another year in which they hope to compete for a Lombardi. Not only that, they’ve already let Julio Jones go this offseason. Without Jones, and Brown, where does that leave Ryan Tannehill? How is he supposed to thrive?

Still, all it takes is one team making an offer too good to refuse. The Jets are known to have plenty of draft capital and just might take a chance on trading for AJ Brown. After all, he’s a former Ole Miss Rebel, just like Elijah Moore, and Brown has already been known to get in a workout or two in New York. The two receivers remain tight, but that doesn’t mean the Titans are willing to listen.

The final blockbuster could end up being DK Metcalf wanting a trade from the Seattle Seahawks. Purely speculative here, but Metcalf could be waiting to see who his quarterback will officially be in 2022 before formally requesting a trade out of Seattle. Also only under contract through this season, do the Seahawks want to risk entering a future without Metcalf?

More importantly, does Metcalf want to stick around on a rebuilding team? For that reason, veteran Tyler Lockett may be more available, hoping to land on a competitor while his skills remain sharp.

The Seahawks could get a haul of draft picks by trading Metcalf while avoiding paying a receiver top dollar in what might not be a highly productive offense for at least 2022, if not longer. Obviously there is a lot of time before the Jets or Seahawks play their first game of the season, meaning a lot can change, but if Metcalf doesn’t sign a contract extension, and if the Seahawks can’t bring in a better QB than Drew Lock, Metcalf may want out sooner than later. In which case, the Jets should be ready to pounce.