The New York Jets missed the playoffs for the 11th consecutive season in 2021. While there was some growth over the previous year, a two-win improvement isn’t impressive when finishing with a 4-13 record. Unlike seven of the other teams who missed the playoffs, the Jets don’t appear to be making any changes at general manager or head coach.

This means they believe they already have the pieces in place to become a playoff team in the next few years. If that much is true, they already have a great starting point compared to many other teams entering the 2022 offseason.

The Jets are also in a position to add several pieces to their roster thanks to their $38 million in projected cap space, in addition to having the fourth and 10th selections in the 2022 NFL Draft. Not to mention already having their franchise quarterback locked up with Zach Wilson under contract through 2024 with the fifth-year option available to add another year in 2025.

These factors give the Jets an opportunity to drastically improve their roster in one season to supply coach Robert Saleh and their 2021 No. 2 overall pick with a winning atmosphere in 2022. Here’s a four-step plan to rebuild the New York Jets this offseason.

1. Give Zach Wilson a safety net

Despite starting just 13 out of a possible 17 games this season, Zach Wilson was sacked 44 times, which was the third-most in the NFL in 2021. But most would say the offensive line wasn’t the problem, and the time to throw measurement at Next Gen Stats backs up what the eyes showed us throughout the season. Wilson takes a long time, from the moment he takes the snap to when he unloads the football.

Statistics courtesy of Next Gen Stats (minimum of 15 pass attempts)

As the data shows, there were weeks when Wilson sped up his throw time, but there were also games when he took longer to get through his reads. They’re traits expected from a 22-year old rookie. The fact that Wilson has shown the ability to speed up his decision-making process is more promising than consistently waiting too long.

The bigger key for Wilson may be as simple as developing more chemistry with his receivers. Get him a safety net that he can rely on consistently while building enough trust in clutch situations where he’s not afraid to pull the trigger.

New York didn’t really invest in their tight end position before the year began. In fact they traded one of their contributors away, by sending Chris Herndon to the Vikings for a fourth-round pick in 2022. They can add to the position either with their five picks landing in the first 100 selections or by going after one of the top tight ends on the free agent market.

Sportsnaut’s 14th-ranked free agent available is tight end Mike Gesicki, who the Dolphins have seen twice per season for the past four years in the AFC East. Gesicki is a big 6-foot-6-inch target from nearby Lakewood, New Jersey and he may enjoy playing closer to home helping Zach Wilson develop.

The New York Jets might be best off rolling with their in-house options while bringing in a top-notch tight end such as Gesicki.

2. Bring a No. 1 receiver to the Big Apple, Calvin Ridley anyone?

2022 will be a big year for Wilson’s development and the New York Jets need to do anything and everything possible to ensure he shows real signs of growth. Signing Gesicki would be a great move for a roster with no true future as the position, yet they would still need a No. 1 receiver.

Despite having plenty of draft capital, there isn’t a Ja’Marr Chase-level prospect in the class. Landing a bonafide No. 1 receiver isn’t easy, many teams go years without one. Jets fans know this all too well.

One player who’s rumored to be available and has already proven himself as one of the best receivers in the NFL is Atlanta Falcons star Calvin Ridley. He only suited up for five games in 2021 as he dealt with personal matters, but some recent speculation has led to the idea Ridley might be traded this offseason.

With plenty of trade capital and a wide-open salary cap in which they can afford to pay Ridley competitive market value, GM Joe Douglas should already be on the phone, trying to determine how much he has to cough up.

If they can acquire Ridley and sign Gesicki, suddenly Wilson’s receiving corps would consist of:

They could also look to bring back Braxton Berrios to provide more depth at the position, but it’s a lot easier to find secondary targets than it is to lock in your ace receiver. If Ridley is truly available, the Jets should make him a top priority as a trade target. 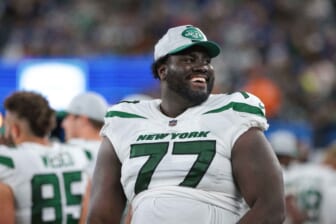 The New York Jets nearly signed Anthony Barr away from the Vikings in 2019, before deciding to stay with the only NFL team he’s ever known. Since he mostly agreed once, who’s to say Barr won’t be tempted to leave this time? Especially now that the coach that wanted to draft him, Mike Zimmer, is no longer employed.

Barr can hold his own in coverage and with the occasional blitz. Not to mention his 6-foot-5 frame can pack a punch, blowing up backs and tight ends with the right execution.

In Minnesota, Barr wore the green dot, meaning he relayed the signals to the defense despite playing OLB. He’s an instinctual player, who’s athleticism shows up all over the field, when healthy. Barr won’t break the bank as much this time around, but he can help stabilize their linebacker group next to C.J. Mosley, adding experience to a defense that is desperate for playmakers at every level.

The New York Jets need to improve all across the defense in 2022. On the bright side, prized free agent acquisition from the 2021 offseason, Carl Lawson will be healthy by the start of the regular season after tearing his Achilles and missing the entire year. Lawson’s return combined with Quinnen Williams and John Franklin-Myers should give them a formidable defensive line that generates plenty of pressure.

However, the back end is a mess. Coach Robert Saleh is probably licking his chops at the idea of drafting Notre Dame safety Kyle Hamilton. He’s the type of prospect who can single-handedly improve a unit, with the positional versatility to do anything asked of him on a football field.

While the 6-foot-4 Swiss-Army knife is effective at stopping the run and can cover a lot of range in the secondary, he’s only one person. The Jets need more to fix a defense that allowed 29.6 points per game, the most in the NFL in 2021.

Their corners are a wasteland, with zero players who project as a team’s future No. 1 cornerback. Again, not good.

After selecting Hamilton at No. 4, the Jets should then select cornerback Ahmad “Sauce” Gardner out of Cincinnati. He’s a tall, rangy athlete who never even allowed a touchdown in college, playing for a top-ranked team for much of the season.

Gardner can handle his own in both man and zone coverage and would be a great shutdown corner to help turn coach Saleh’s defense around. Pair Hamilton and Gardner in the back end with Lawson, Williams, and Franklin-Myers messing up the trenches and the New York Jets defense can look 1000% better next season.