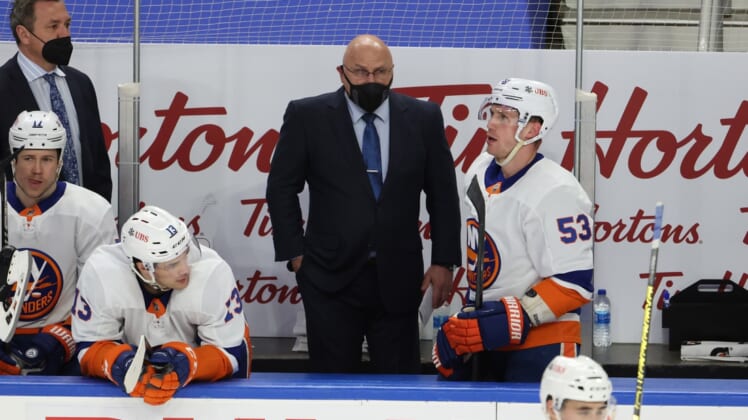 Brock Nelson scored twice in a span of 3:40 in the second period Saturday night as the New York Islanders scored four unanswered goals in a 5-1 rout of the visiting New Jersey Devils in the final regular-season game at Nassau Coliseum in Uniondale, New York.

The Islanders will host at least two playoff games in the building which opened in 1972 and hosted four consecutive Stanley Cup championship teams from 1980 to 1983. The Islanders will move further west on Hempstead Turnpike to $1.5 billion UBS Arena in Elmont NY.

Jordan Eberle scored late in the first period, and Nelson struck twice by swatting in a pair of rebounds after New Jersey’s Andreas Johnsson tied the game less than five minutes into the second.

Nelson scored his first goal on a power play by getting the rebound of Oliver Wahlstrom’s shot with 11 minutes remaining to give the Islanders a 2-1 lead. Nelson then made it 3-1 with 7:20 left when he lifted a rebound of a Josh Bailey shot into the net

Former Devil Kyle Palmieri and Mathew Barzal scored in a span of 37 seconds early in the third as the Islanders halted a three-game losing streak.

Rookie Ilya Sorokin made 23 saves and had a mostly quiet night. He preserved New York’s one-goal lead by stopping Miles Wood on a breakaway in the final minute of the opening period.

Leo Komarov forced a defensive zone turnover and moved the puck to Barzal. Barzal left a drop pass in the middle of the slot for Eberle, who lifted a forehand shot over Blackwood.

New Jersey tied the game 4:58 into the second when Johnsson lifted a one-timer from the low slot over Sorokin before Nelson struck.

After Nelson scored, Palmieri put a backhander by Blackwood while crashing into the net at 3:32 of the third. Barzal made it 5-1 on the next shift by finishing off a 2-on-1 with Eberle.