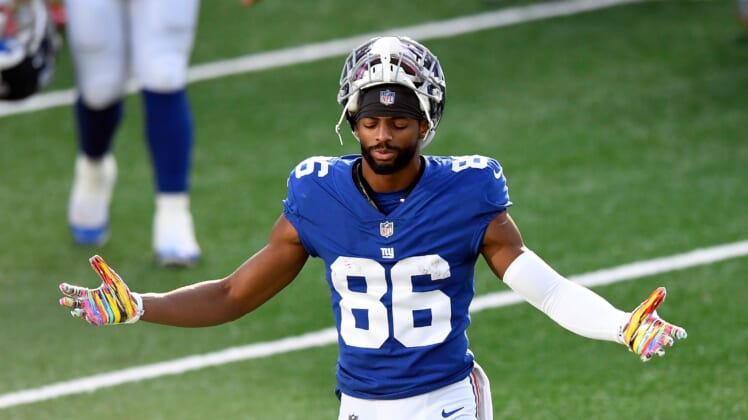 The New York Giants have reportedly checked around the league to gauge interest in a trade for three-year veteran wide receiver Darius Slayton.

Much of the talk over the last week, when it comes to the Giant’s wide receivers, is of second-year man Kadarius Toney skipping voluntary workouts and then reports just days later that general manager Joe Schoen was actually shopping the former 2021 first-round pick in the hopes of securing a trade partner sometime soon.

Well, it seems that Toney isn’t the only one of the team’s pass catchers on the block. On Monday, The Athletic’s Giants reporter Dan Duggan reported that the team was also looking to find an interested party for the services of Darius Slayton.

The 2019 fifth-round pick has earned a pay increase from the $920,000 he made last season to the $2.5 million he will get in 2022, because of performance-related salary escalators in his contract. The Giants are currently one of the teams with the least salary cap space in the league as they head into Thursday’s NFL Draft.

Since March, they have reportedly been looking to also move former Pro Bowlers like cornerback James Bradberry and running back Saquon Barkley in an attempt to free up cap space.

Slayton is an alum of Auburn and showed solid potential over his first two seasons with the team. Pulling in 48 catches, eight touchdowns, and 740 yards through the air in his rookie season. Then 50 catches, 751 yards, and 3 TDs in his 2020 follow-up year. However, he battled injuries in 2021 and saw major declines in both his catches and receiving yards numbers last season.