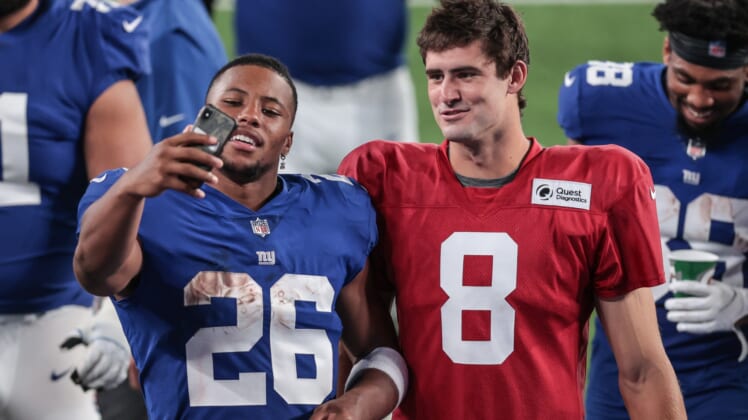 New York Giants stars Saquon Barkley and Daniel Jones are making news for the wrong reasons this weekend, getting busted for maskless partying.

The NFL has created strict protocols this season, including for off-field behavior, during the COVID-19 pandemic. As if the 2020 season hasn’t been disappointing enough for the Giants, it has now taken another unfortunate turn.

Saquon Barkley and Daniel Jones were identified at a party hosted by DJ Lugghead on Friday night. In since-deleted posts on Instagram, the star running back and second-year quarterback are seen at a bar without masks.

According to ESPN’s Jordan Raanan, Barkley and Jones had dinner with teammates and friends in a private section of a restaurant on Friday night. After the meal, they were invited to a private party at a bar, which was closed to the public.

The Giants released a statement on Saturday confirming they were aware of the posts on social media.

The alleged party came a night after the Giants lost to the Philadelphia Eagles on Thursday Night Football. In the 22-21 loss, Jones had two turnovers and tripped himself on a potential touchdown run.

Barkley suffered a strained MCL and torn ACL in Week 2. He is scheduled to undergo surgery to repair the ACL next week, with the team hopeful for a full recovery by training camp. However, the organization likely won’t love the image of him partying without a mask and on a torn ACL.

Players can be disciplined for “reckless” behavior under the NFL’s COVID-19 protocols, like being at an indoor club or bar with 10-plus people and no masks. Given the league didn’t punish the Tennessee Titans players or coaches for reckless actions leading to a COVID-19 outbreak, it’s unlikely any significant punishment would be looming for Barkley and Jones.