The New York Giants are expected to part ways with general manager Dave Gettleman after the NFL season, moving on after four seasons of Gettleman’s return to New York delivering poor results. While the official search for a new general manager hasn’t begun, the Giants could reportedly be looking at an in-house hire.

When New York hired Gettleman in 2018, the organization hoped it could recreate the magic from its glory years. Gettleman first worked for the Giants as director of pro personnel (1999-2011) and later was promoted to senior pro personnel analyst. Once the Carolina Panthers fired him as their general manager in 2017, New York waited less than a year to scoop him up.

Now, according to CBS Sports’ Jason La Canfora, the Giants could be looking at another familiar name to replace him. Kevin Abrams, the team’s vice president of football operations, is reportedly a ‘strong contender’ to succeed Gettleman as the general manager. 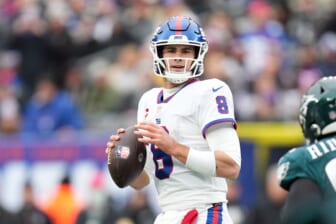 Abrams began his career in the front office in 1999 with the Giants, working for the storied NFL franchise as a salary cap analyst. After holding that title from 1999-2001, he was promoted to assistant general manager (2002-’17). When New York fired GM Jerry Reese in 2017, Abrams held the role on an interim basis and interviewed for the position before New York hired Gettleman.

Abrams’ background in navigating the salary cap and his familiarity with analytics set him apart from Gettleman. The veteran executive also has ties across the NFL, qualities that certainly make him appealing to the Mara family. It would likely also help that he is a familiar name who has remained loyal to the Maras for decades.

But if Abrams is hired, fans will likely have concerns about the Giants’ process and future. New York will finish 2021 with its fourth consecutive season of double-digit losses. Despite this team’s downward spiral, its process doesn’t seem to be changing.

One thing is for certain, Abrams being promoted to general manager would almost guarantee head coach Joe Judge returns in 2022.