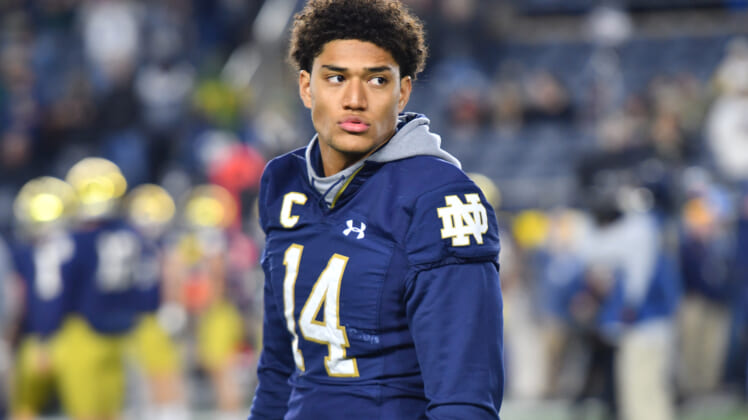 The 2022 NFL Draft is approaching fast and New York Giants general manager Joe Schoen is in a great spot for his first draft as the decision-maker, holding a pair of top-10 picks in a deep class.

New York is reportedly exploring its trade options, preferring a scenario where it can acquire future first-round picks and take advantage of assets teams value less than 2022 selections. While it’s possible a deal is made, the Giants’ draft positioning and needs could offer Schoen a real opportunity to fix problems immediately.

If Schoen addresses tackle with the top pick, there will be plenty of debate about who the Giants will draft with the 7th pick. Let’s examine the best defensive options New York could select with one of its first-round picks.

Throughout their history, the Giants have always been at their best when led by a dominant pass rush. Unfortunately, It’s been years since New York’s defensive front could even be viewed as an average group compared to the rest of the NFL. That’s where Kayvon Thibodeaux comes into the picture.

The 6-foot-5, 250-pound edge rusher appeared in 30 games in college and registered 19 sacks. He is a fast and explosive player, but some are not convinced he’s what he’s being hyped up to be. Some NFL teams are concerned about his effort level. Interestingly, Thibodeaux calls himself Jadeveon Clowney 2.0.

There are some red flags with Thibodeaux and the comparison might be alarming. Just keep in mind, Clowney recorded 53 pressures last season (PFF) and is an excellent No.2 edge rusher. Thibodeaux has tremendous ability and could wind up being the best defensive player in this draft. If he’s there when the Giants are on the clock, it will be hard to pass on him.

If the Giants are determined to grab a pass rusher and Thibodeaux is off the board, Jermaine Johnson would be a good option as many feel he is the third-best edge rusher in this draft behind Thibodeaux, and Michigan’s Aidan Hutchinson.

After serving as a rotational player on a loaded Georgia defense (6.5 sacks in 20 games), Johnson transferred to Florida State. He thrived on the Seminoles’ defense this past season, recording 11.5 sacks in 12 games. At 6-foot-5 and 254 pounds, he has the ideal size for an edge rusher in today’s NFL and should be a Week 1 starter on the opposite side of Azeez Ojulari.

Sauce Gardner becomes more of a possibility if the Giants trade James Bradberry prior to the draft. A standout cornerback at Cincinnati, Gardner is the No. 4 overall prospect on Sportsnaut’s 2022 NFL Draft board and he can be an instant contributor as a rookie.

Gardner (6-foot-3) to battle tall receivers and shut down one side of the field. While his interception totals might not stand out, there’s a reason for it. Opponents stopped throwing in his direction. Incredibly, per Pro Football Focus, Gardner didn’t allow a single touchdown in coverage during his career.

Gardner has the potential to be one of the best corners in the league for years to come and he would be a welcomed addition to defensive coordinator Don “Wink’ Martindale’s defense.

This might be a bit of reach to take a safety with a top-seven pick, but you need playmakers on the back end of your defense and that is what Hamilton is. In his three years with the Fighting Irish, he registered 138 tackles and eight interceptions.

He has the versatility to play either safety position alongside Xavier McKinney and has the athleticism to cover tight ends which is an issue that has played the Giants for many years.

The 6’4 220 pound safety is an exceptional athlete, but it will probably serve Big Blue best to take a player that can improve their defensive front seven.