5 reasons the New York Giants are dark horses in 2021

It’s been a rough few seasons for New York Giants fans. Over the past four years, the G-Men are tied with the New York Jets for the worst record in football at 18-46.

Missing the postseason since 2016, is this the year the playoff drought ends for the Big Blue? Possibly.

From the start of free agency, David Gettleman was ready to buy. By pouncing on Kenny Golladay, the Giants’ general manager was able to get what appeared to be their top free-agent target.

Adoree’ Jackson’s surprise release allowed Gettleman a chance to swoop in and sign a new No. 2 cornerback for Patrick Graham’s defense.

While the Golladay and Jackson signings drew more attention because of the dollar amounts, there were several other moves that should amount to more depth than in past seasons.

More importantly, the New York Giants spent the offseason shopping for a variety of new toys for quarterback Daniel Jones.

It was clear the Giants needed to add a big body to their receiving group. Gettleman managed to bring in two proven veterans who can help put more points on the board at MetLife.

Adding Kyle Rudolph gives their young QB another large target between the hashes and in the red zone. With just one dropped pass in the past three seasons, Danny Dimes will quickly realize Rudolph is as reliable as they come.

Kenny Golladay is the big wideout Daniel Jones has never had. It’s modern-day free agency, he was the best one available, so Golladay got paid like a No. 1 receiver. Now it’s up to him and Danny Dimes to prove it.

For the Giants, getting Jones, the NFL’s best deep-ball passer from 2020, a downfield threat was crucial. Their offense may not have been very explosive in recent seasons, but that should change with “Gobbleday.”

The Giants already had Darius Slayton and Sterling Shepard. In the draft, they added Kadarius Toney with the 20th selection.

Some say Kenny G got paid too much, but adding him to a group of capable receivers could be a smooth move.

We can’t forget about Evan Engram. It seems every season he’s predicted to breakout. We saw Engram stay healthy for a full year in 2020, making the Pro Bowl in the process. There’s a good chance he takes another step.

Pairing Engram with Rudolph gives Danny Dimes a dynamic duo at the tight end position, something the Giants haven’t had in years. All of these additions will hopefully lead to offensive coordinator Jason Garrett going with a more aggressive deep passing approach when the situation calls for it.

Saquon Barkley can carry New York Giants to Playoffs in 2021

Once he’s fully healthy, the New York Football Giants need to ride Saquon Barkley all the way to the playoffs. There’s no reason why Saquads shouldn’t be the focal point of this scoring attack, carrying the load just as many times as Derrick Henry and Dalvin Cook do for their respective teams. 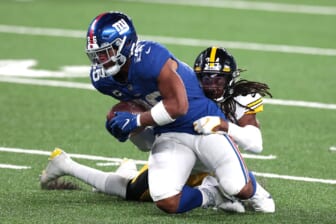 Building off what should be a better big-play offense should only open up more running lanes for Barkley to burst through. Once the defense has to fear what the Giants are doing over the top, they won’t be able to stack the box in an attempt to muffle Barkley’s game-breaking ability.

If the Giants can strike a balance between feeding Barkley and utilizing their new playmakers’ skills, the sky’s the limit for this offense in 2021.

Despite the offense falling flat in 2020, the G-Men were very stout defensively. In fact, it was a big reason for their four-game winning streak in which they held their opponents to 20 or fewer points in each victory.

Their defensive toughness was sudden and a bit unexpected. In 2019, the Giants ranked 30th in points allowed. Last year, they improved to ninth-best in the NFL.

With another season under defensive coordinator Patrick Graham, they could get even better. It may not approach the levels of the Big Blue Wrecking Crew in the 80s, but this Giants defense will be mighty once again in 2021.

A stronger secondary boosted by the addition of Adoree’ Jackson should make things easier for an already stout front seven.

Retaining Leonard Williams was vital and Dexter Lawrence continues to learn more each year. Developing the rushers aside from those two could be the rug that ties this room together.

Despite their many injuries last season, the New York Giants still had a chance to win the NFC East. After an offseason of improvements, there’s no reason they can’t be in the same race down the stretch once again this year.

The Philadelphia Eagles changed coaches, the Washington Football Team swapped quarterbacks and Dak Prescott is coming back from a major injury with the Dallas Cowboys. Meanwhile, in New York, their general manager, coach, and quarterback are all returning.

Just one win away from reaching the playoffs, the Giants hope their offseason acquisitions combined with the continued growth of their young pieces can help make up the difference.

Will the New York Giants playoff drought end in 2021?

The over/under for NY Giants betting odds are placed at seven wins. After going 6-10 last season and now with an extra game to play, seven seems like a safe number.

But fans of the New York Football Giants aren’t shy. They’ll be the first to tell you their projected win total is too low. If Daniel Jones takes the crucial year three leap many QBs take, the Giants will have no issues competing for a playoff spot in the Big Apple.

For the Giants to taste the playoffs, Danny Dimes will have to be on point, cutting down on turnovers. On the other side of the ball, finding a way to routinely chase down quarterbacks on gamedays will be crucial.

If those two strategies come to fruition, the Giants should be able to make their first postseason appearance since 2016 when Eli Manning was still lacing them up at the Meadowlands.