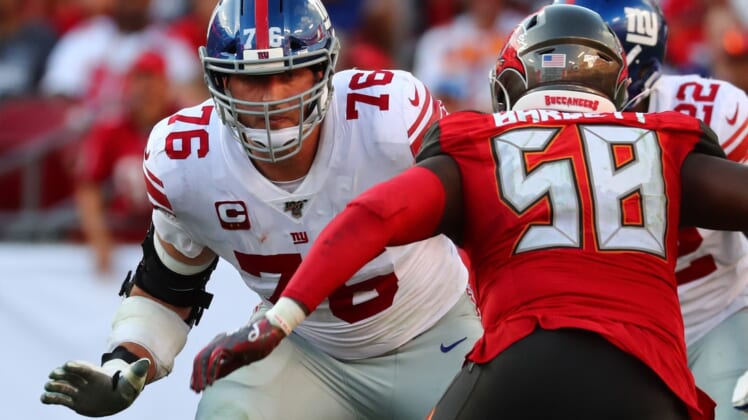 The New York Giants on Wednesday announced that they have signed offensive tackle Nate Solder to a restructured deal that will keep him in a Giants uniform for the 2021 season.

The new deal will pay him $4 million this season, a cap savings of $6 million, per reports. Solder was scheduled to count $16.5 million against the cap for 2021.

Solder, who turns 33 next month, opted out of the 2020 season over concerns about the COVID-19 pandemic.

Solder’s son, Hudson, was diagnosed with cancer at just 3 months old, and Solder and his wife, Lexi, have helped their son fight the disease. Solder is a cancer survivor, having been diagnosed with testicular cancer ahead of the 2014 season.

Solder started all 32 games at left tackle for the Giants after signing a four-year, $62 million contract in March 2018. He won two Super Bowl championships with the New England Patriots during his tenure there from 2011-17.

Andrew Thomas emerged as the starting left tackle as a rookie for the Giants last season and fellow 2020 draft pick Matt Peart is expected to be the starting right tackle. Solder last played RT in 2011 as a rookie with New England.