The relationship between the New Orleans Saints and historically productive wide receiver Michael Thomas has gotten so strained that the team is believed to be willing to trade him “sooner rather than later.”

Larry Holder of The Athletic reported the latest buzz on Thomas on Friday, indicating that he anticipates an “unceremonious end” to Thomas’ time in New Orleans.

In the wake of legendary quarterback Drew Brees’ retirement, and after an offseason that featured dizzying salary cap cartwheels just to field a competitive roster, the last thing the Saints want is their best playmaker out of town.

Taysom Hill and Jameis Winston already make for a tenuous quarterback situation. If they don’t have their only viable wideout in Thomas to throw to, it’s going to be even more of an uphill battle for head coach Sean Payton to get the elite production he’s accustomed to out of his offense. 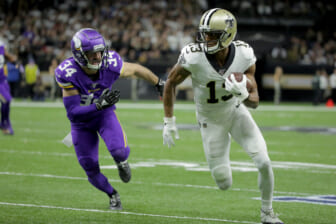 What a Michael Thomas trade would mean for New Orleans Saints

If you look ahead at the nightmarish 2022 salary cap situation the Saints are in for — a cool $35.8 million in the red — it seems like a total doom-and-gloom scenario.

All the contract restructures and kicking the can maneuvers GM Mickey Loomis pulled off in the name of staying relevant for this year may well backfire. Thomas has a team-high $24.7 million cap hit next year, all but $2 million of which New Orleans would eat in dead money, unless a trade suitor takes on some of the 28-year-old’s salary.

Just looking at Thomas’ raw statistics, it’s obvious how valuable he is. Bear in mind, those mind-boggling numbers, wherein he averages over 100 catches per year, include the 2020 campaign, where Thomas had only 40 grabs for 438 yards and zero scores, appearing in only seven games.

The ankle injury that plagued Thomas last year is actually a big reason for his rift with the Saints. Whatever happened, or whoever is truly to blame, it seems like a parting of ways is best for New Orleans and Thomas, even if it stings. 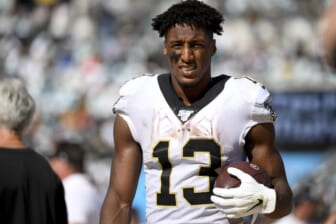 Beyond finding a trade partner, too, the Saints badly need to find another viable wide receiver once Thomas is gone.

Thomas’ trade value might dip a little bit due to the ongoing drama he’s staging with the Saints organization. No matter — someone will be more than willing to not only take on Thomas, but also give New Orleans some much-needed assets to build for the future.

One great way for the Saints to circumvent their cap issues is to pull off a blockbuster Thomas trade in which they snag at least one first-round pick, and possibly a Day 2 selection as well. Depending on where Thomas goes, heck, that first-rounder could even turn into Brees’ eventual heir at QB.

The Jacksonville Jaguars are rumored to be interested in dealing for Thomas, as new Jags coach Urban Meyer would be reunited with one of his former Ohio State players in that scenario.

Other cash-flush teams to watch for in the apparently-imminent Thomas sweepstakes are the New York Jets, the Indianapolis Colts and the Chicago Bears.